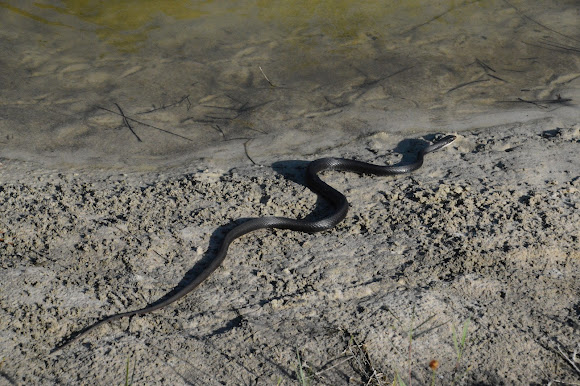 Average adult size is 20-56 inches (50-142 cm), record is 72 inches (182 cm). Adult color is black with white markings on the chin and throat. The belly is grayish to uniform black. The body is slender and the scales are smooth, and there are 17 dorsal scale rows at midbody. The pupil is round. Juvenile color is gray with distinct reddish-brown blotches fading into a solid-colored tail. (information from Florida Museum of Natural History)

HARMLESS (Non-Venomous), though they will readily bite to defend themselves. Racers are one of the snakes most likely to be seen by Floridians. It inhabits both rural and urban habitats and is frequently seen in residential areas during the daytime. Like other racers, it is fast moving and can climb and swim well. When discovered, the racer will usually flee for shelter, relying on its speed and agility to avoid capture. However, when cornered, its only defense is to strike. Its bite is harmless, but its needle-sharp teeth can cause bleeding. When annoyed, it may rapidly vibrate its tail in the leaf litter, producing a buzzing sound. The Racer does not make a good pet because it never gets over its nervous disposition. Racers are opportunistic predators whose diet is as varied as their choice of habitat. It feeds on frogs, lizards, snakes, rodents, and birds and their eggs. In Florida, frogs, lizards and small snakes make up the majority of the Racer's diet. Despite its scientific name, Coluber constrictor, the Racer is not a true constrictor and overpowers its prey by simply grabbing it in its jaws and pressing it against the ground until it stops struggling. Breeding occurs from March through June, and 6-20 eggs are laid from May through August. Newborns are 6-9 inches (15-22 cm) in length. (Information from Florida Museum of Natural History)