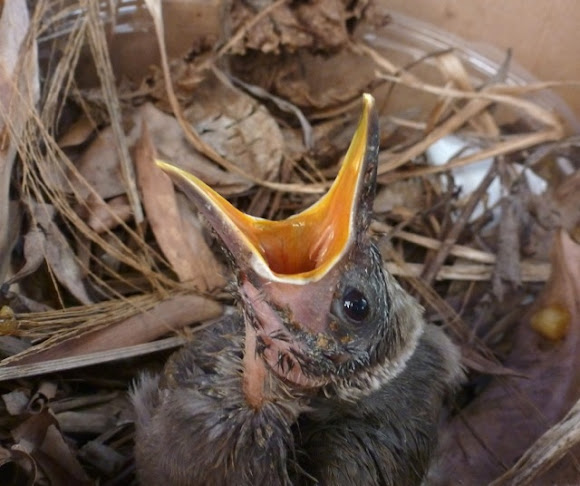 The friarbirds (also called leatherheads) are about 15 species of relatively large honeyeaters in the genus Philemon. Additionally, the single member of the genus Melitograis is called the White-streaked Friarbird. Friarbirds are found in Australia, Papua New Guinea, eastern Indonesia and New Caledonia. They eat nectar, insects and other invertebrates, flowers, fruit and seeds. The friarbirds generally have drab plumage. In many instances their plumage is mimicked by smaller orioles, which use the aggressive nature of the friarbirds to avoid aggression themselves.

this little bird was found in the tropical rainforest of far north-east Australia.

Oh, good--I was going on your letter 'F' clue and took a wild guess.

oh thanks auntnance and Liam, that's the one!

Head shape looks Friarbird-esque to me as well. :)

@auntnance,
this little bird was found in the tropical rainforest of far north-east Australia. Seem to remember it's name started with an F!

My what a big nose you have, Baby Bird. Do you have any more info on where he was found?