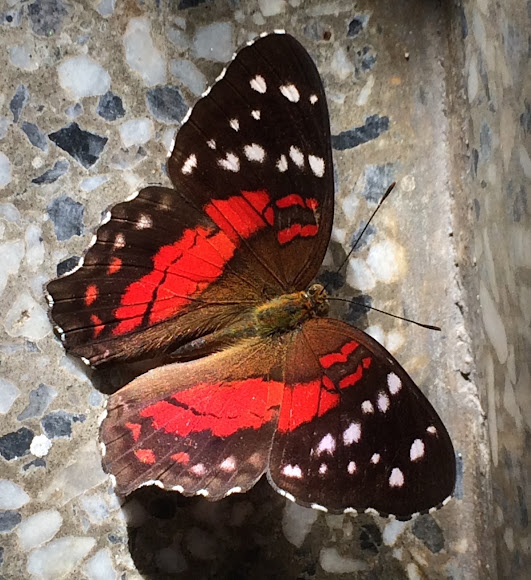 Anartia amathea is a lightly built, medium sized butterfly with a wing span of approximately 4 cm. The base colour of the wings is either dark brown or black and there are usually three large red spots located near the base of the lower wings. The males have a distinct red coloration whereas the females are slightly larger and orange. Butterfly wings are covered with tiny scales which reflect light, which is observed as their coloration. The orientation of these scales also aids in thermoregulation, which is regulation of body heat. Both sexes possess a band that spans both the top wings and part of the lower wings with a series of white spots. The underside of this butterfly is almost identical in pattern but much paler in colour than the top. The markings that are black on the top surface of this butterfly are pale brown on the underside. The head is small and the antennae are slender and slightly shorter than the length of the body. Adult life is short, spanning somewhere in between one and two weeks. The flight pattern of this butterfly is described as jaunty yet somewhat erratic, with a flight height between approximately 2-5 m above ground. Once this butterfly alights on a surface, usually vegetation, it spreads its wings and orient towards the sun so that it can thermoregulate. When conditions are overcast however, it orients in a random direction.

On the schoolsteps, near the Avila Mountainrange in Altamira Caracas, Venezuela

When going home I turned the corner to the steps up and there he was. VERY bright in the afternoon sun. It was about 16.00 and he was catching some rays of sunshine!

Thank you maplemoth662
Yes, it took me by surprise coming around the corner. :-)

Thanks DanielePralong.
The combination of really bad internet connection and no possibility to walk around town with a camera makes posting sometimes very hard.
I have some back up postings to do but am limited in internet.
Feels good to have been missed :-)

What a beauty! Nice to have you back Debbie!

Thank you Brian38
I agree! It is hard to take pictures though as most of the times I do not walk around with phone or camera!
But when I do...I will post as much as I can because Venezuela has lots of treasures.

It's great to see some Venezuelan butterflies on Project noah! There are so many beautiful butterflies there. Very nice series and info.