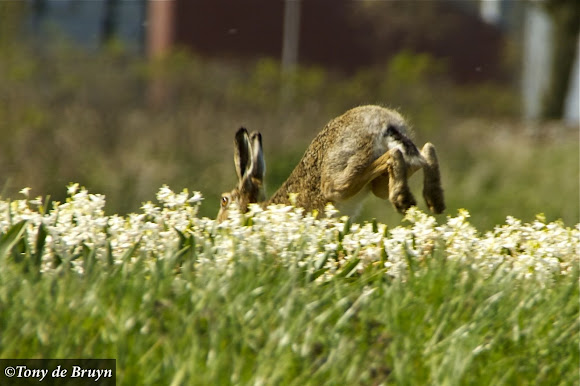 In modern paganism, the hare (or rabbit) is associated with the spring goddess Eostre. In Germany, the Netherlands, Belgium and some other European mainland countries, it still is the Easter hare rather than the Easter Bunny. The phase "mad as a March hare" was derived from observations of the hare’s breeding behavior. The hare is a character of some fables, such as The Tortoise and the Hare of Aesop. It also appears in Alice in Wonderland by Lewis Carroll, in which Alice participates in a tea party with the March Hare and the Mad Hatter. Unfortunately this har took off the moment I spotted it

Thank you Alice! But the story came from the wikipedia site. Except for the last line of course.

But your story made up for the lack of a full picture! Very nice.

Very lucky! At the moment I had my camera at hand but before I could ame properly he was gone.

Lucky catch...
Here I find them disappeared within couple of seconds.... before take out my camera.... :(

Nice shot, difficult to catch them :)