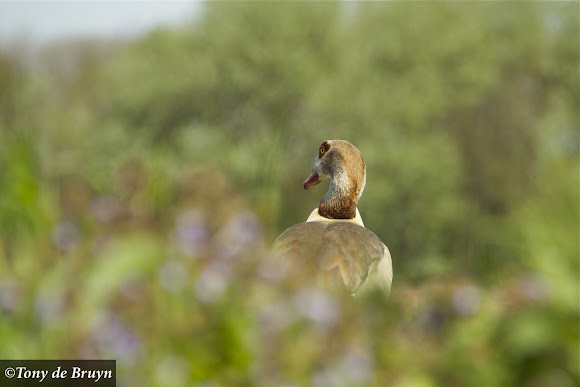 The Egyptian Goose (Alopochen aegyptiacus) is a member of the duck, goose, and swan family Anatidae. It is native to Africa south of the Sahara and the Nile Valley, and has been introduced to parts of Western Europe. Egyptian Geese were considered sacred by the ancient Egyptians, and appeared in much of their artwork.

This is a largely terrestrial species, which will also perch readily on trees and buildings. Egyptian geese typically eat seeds, leaves, grasses, and plant stems. Occasionally, they will eat locusts, worms, or other small animals. They are extremely territorial and often fight with other pairs for a breeding ground. Neighbouring pairs may even kill another's offspring for their own offsprings' survival as well as for more resources. This species will nest in a large variety of situations, especially in holes in mature trees in parkland. The female builds the nest from reeds, leaves and grass, and both parents take turns incubating eggs. Egyptian Geese usually pair for life. Both the male and female care for the offspring until they are old enough to care for themselves.