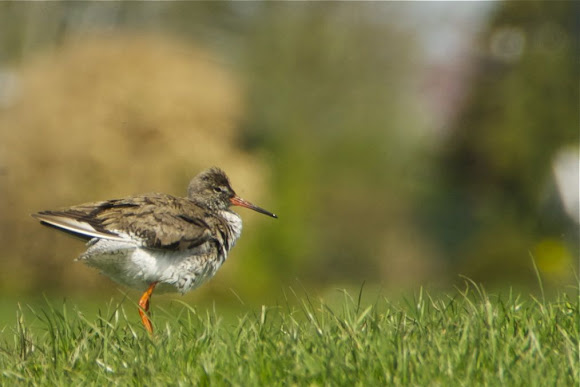 Common Redshanks in breeding plumage are a marbled brown color, slightly lighter below. In winter plumage they become somewhat lighter-toned and less patterned, being rather plain greyish-brown above and whitish below. They have red legs and a black-tipped red bill, and show white up the back and on the wings in flight.

It is a widespread breeding bird across temperate Eurasia. It is a migratory species, wintering on coasts around the Mediterranean, on the Atlantic coast of Europe from Great Britain southwards, and in South Asia. They are uncommon vagrants outside these areas; on Palau in Micronesia for example, the species was recorded in the mid-1970s and in 2000. They are wary and noisy birds which will alert everything else with their loud piping call. Like most waders, they feed on small invertebrates. Redshanks will nest in any wetland, from damp meadows to saltmarsh, often at high densities. They lay 3-5 eggs. The Common Redshank is one of the species to which the Agreement on the Conservation of African-Eurasian Migratory Waterbirds (AEWA) applies.