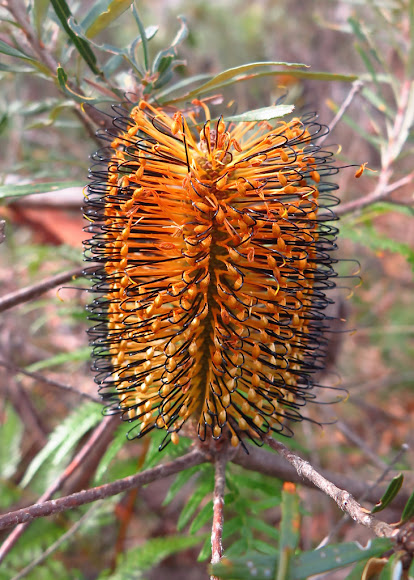 The New England Banksia is a species of woody shrub of the genus Banksia in the Proteaceae family, and is native to Queensland and New South Wales in eastern Australia. The flowers are quite striking when in full bloom, and are very similar in appearance to the Hairpin Banksia (Banksia spinulosa), although now recognised as a separate species.

Spotted along the Underground Creek Track, which runs along Bald Rock Creek in Girraween National Park. This area could only be described as a banksia forest - there were thousands of shrubs. Growing amongst larger native eucalypt species.

May Gibbs, an Australian author, wrote a series of children's books called Snugglepot and Cuddlepie, the first book in the series published in 1918. Snugglepot and Cuddlepie, the gumnut babies, are the protagonists of the story and are modelled on the appearance of young Eucalyptus (gum tree) nuts. The villains are the Banksia Men which are modelled on the appearance of aged Banksia 'cones', with follicles for eyes and other facial features. The second photo in this series shows the Banksia Men (which really could be one of any number of Banksia species). http://en.wikipedia.org/wiki/Snugglepot_...

I can't look at these flowers and not think of May Gibbs and the characters in her books, and to walk through a banksia forest such as this, they just come to life. Dr. Suess was another favourite of my generation, and my parents. The proteaceae species are my absolute favourite flowering plants, and the shrubs are so unruly, and the flowers so amazingly beautiful.