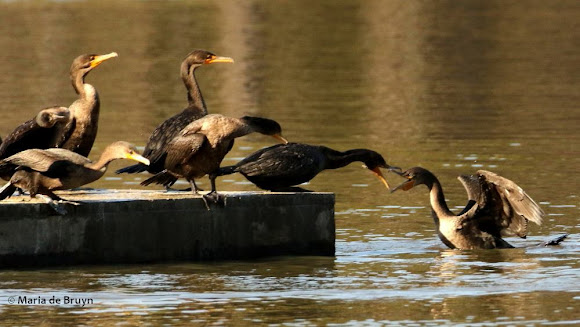 A large group of cormorants were visiting the lake and many of them enjoyed sunning on a couple floating platforms. In this case, one bird apparently wanted to get on the platform but another did not want to make room so they had a face-off with open beaks sometimes almost touching. The bird in the water eventually did displace the one who challenged him/her.

Small man-made lake created by damming a local creek when a developer created a residential neighborhood many decades ago.

Many birds were drawn to a small man-made lake in an urban neighborhood when there was a shad die-off. The fish in question cannot take water temperatures lower than about 42 degrees F and there had been an unusual snowstorm two weeks earlier accompanied by several days of very low temperatures. This attracted gulls, eagles and cormorants to the lake. At one point there must have been some 80-100 or more cormorants in residence.

Hema, during breeding season these birds get a double crest of black and white feathers

do you know why they are called double crested?