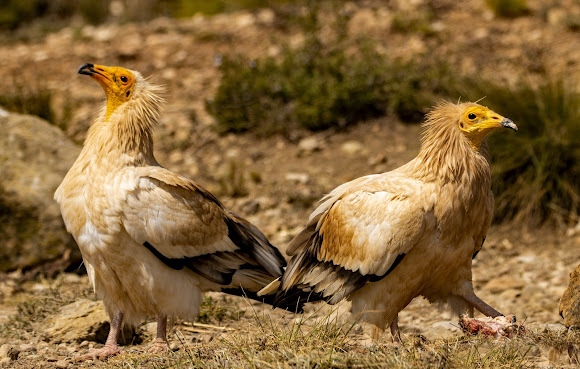 A pair of Egyptian Vultures seen here interacting with and a number of The Griffon Vultures and Ravens.The male Egyptian arrived first followed by the female. Withing a few minutes a wake of Griffons followed accompanied by a dozen Ravens. The Griffons 'mobbed' the Egyptians driving them away from the food scraps Also called the white scavenger vulture or pharaoh's chicken,

Couples build nests together, in rocky areas, often on cliffs.

Egyptian vultures are opportunists and eat very varied. Their diet consists mainly of carrion, but also small mammals, young birds, fish, eggs and even rotting fruit. The species can fly up to 80 kilometers per day in search of food. Due to their smaller size, Egyptian vultures must often wait for other species to have finished eating. The thin beak is perfectly adapted to catch the small pieces of leftover meat on carcasses. Also, they can break an egg by repeatedly dropping stones on it.Unfortunately we didn't get to see this as the Ravens stole the eggs! During the last decades, the number of Egyptian vultures declined dramatically in Europe. The largest European population is located in Spain (1300 to 1500 pairs). The Bible makes a reference to the Egyptian vulture under the Hebrew name of rachamah/racham which has been translated into English as "gier-eagle". see video - https://youtu.be/tBoI0EjrdTY