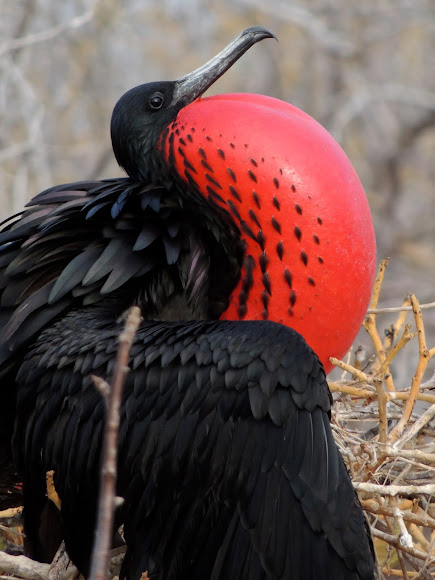 Males are all black with a scarlet throat pouch which is inflated like a balloon in the breeding season. The Galapagos population of this tropical seabird may be its own genetically distinct species warranting a new conservation status. This small population of genetically unique Magnificent Frigatebirds is a vulnerable population. Any catastrophic event or threats by humans could wipe out the approximate 2,000 Magnificent Frigatebirds that nest on the Galapagos Islands. Magnificent Frigatebirds are currently classified as Least Concern (LC)' by the International Union for Conservation of Nature, but the Proceedings of the Royal Society paper recommends that, because of the genetic uniqueness of those on the Galápagos, this status be revisited.

Wow! Those Are Incredible!

Thank you Don! The Galapagos was incredible - it will be a tough photo safari to beat!

There is just nothing quite like the Galapagos Archipelago! A very nice series of images.

Thanks guys! These show-offs are very photogenic!

Thanks Jill! You are right - it is an absolutely amazing place!
I've resolved the location problem - I've found that the Spanish names seem to work whereas the English versions & the coordinates don't for some reason.

Wonderful series Karen the galapagos is truly an amazing place. I couldn't get the exact locations for my spottings either it is quite frustrating :)