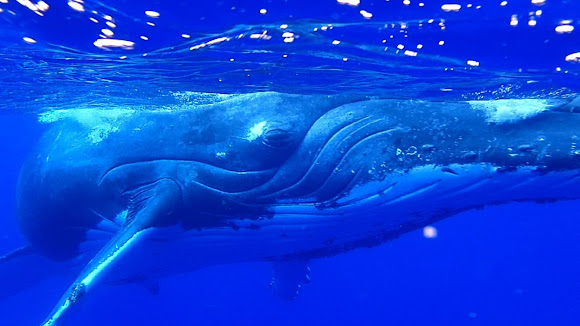 These large migratory whales appear almost black above the surface of the water but melt into the blue when viewed underwater. The adults range from 12-16m, weighing up to 36tonne. Females are larger than males because they don't feed for months at a time after giving birth and while suckling their young calf. Their diet consists mainly of krill and fish (found in the antarctic). When the whales come to the surface to breath (adults around 12mins, calves a lot more frequently), their distinctive 'humped back' makes them easily identifiable (mother and calf in image 3). Their tail flukes are also very recognisable and each one is unique, allowing identification of indviduals (image 4)

They feed in the antarctic waters in summer months when feed is plentiful. These particular whales then migrate north, via the Kermadec Islands and use the Tonga Chasm to navigate up to the warmer tropics. There is no feed for these animals while in the tropics and they congregate just to calve and mate. Due to this, the males especially spend a lot of time resting in the water, just hanging, conserving energy, only moving to surface and breath, until it is time to mate.

Niue is one of the few places in the world where it is possible to swim with these amazing creatures. The Niueans have created their own stringent set of rules around approaching the animals (no wake, etc) and time in the water, and a 'no diving rule'. They have a very strong affinity with these creatures and are It is the choice of the whales whether they interact or not. On my four swims, three times the whales surfaced to breathe and then swam away from us. On the fourth the whale in image 1 came up from about 80m away, and swam directly to us, did a 90degree turn (carefully keeping his powerful tail down and away from everyone) about 3-5m away and very gently swam along the line of swimmers. He then visited the support boat about 100m away and then dived down about 20m behind it in only about 50m of water (image 6) New research about the evolving calls of these majestic creatures is indicating a potential congregation point at the Kermadecs, where songs are exchanged and learnt. If you have any images of whale flukes from Niue, please provide them to omatafua@gmail.com. For more information on Oma Tafua go to: http://www.sprep.org/biodiversity-ecosys...

This was one of my most recent favorites!

Thank you Sarah. I must admit, having the first image as my screen saver is as much a distraction as a great reminder of an awesome experience. (I think something like this qualifies as using the word awesome!)

WAY TO GO, remkinloch!!
THIS should win spotting of the year, too!! :)

Many thanks to you all for your congratulations on SOTW. Being a relative new-comer to PN and this being my first SOTW I am very pleased with the accolade. Can thoroughly recommend a trip to Niue to swim with these gentle giants.

Agree with Mark. Congratulations on your SOTW!

Congrats on the SOTW.
Not surprised really... a cracker of a spotting.

Congratulations Rachel, this exceptional series has been voted Spotting of the Week!

Thanks for all of the positive commentary. Although my 10yr old daughter was on the boat for this particular encounter, I was lucky enough to be in the water with her for the three other ones. Very special indeed.

Brilliant Rach. Looking into his eye like that will be a lifetime memory!

Great spotting all round ! Thanks - what a wonderful experience.

Thank you for the nomination Daniele. And thanks Sarah & Marta for your kind comments. It was utterly amazing to be in the water with these guys.

Your spotting has been nominated for the Spotting of the Week. The winner will be chosen by the Project Noah Rangers based on a combination of factors including: uniqueness of the shot, status of the organism (for example, rare or endangered), quality of the information provided in the habitat and description sections. There is a subjective element, of course; the spotting with the highest number of Ranger votes is chosen. Congratulations on being nominated Rachel!