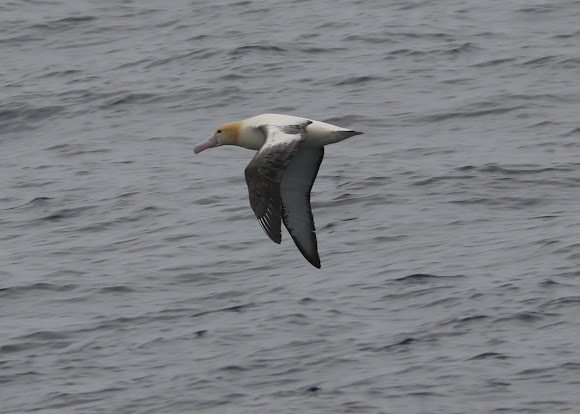 Also known as Steller's Albatross. This is a medium sized albatross with a wingspan of approx.215-230 cm (85-90"). The adults are mostly white on the body, under-wing and patches on the top wing. The rest of the top wing is black. The bill is large and pink with a white tip, pink legs and the birds have a yellowish crown, nape and collar. contrary to its name its tail isn't really any shorter than other albatross species found in the area.

Found out in the open sea south of Tokyo Bay on the way to Hachijojima Island in the Izu Island group. North Pacific.

This species has an interesting history. It was hunted to near extinction by the first part of the 20th century for the feather trade. In 1946 it was assumed to have gone extinct as no breeding birds could be found. Amazingly an estimated 50 or so juvenile birds must have still been at sea (These birds take many years to reach sexual maturity.) and in the early 1950's the first eggs were recorded being laid. Since then, through protection programmes and good management (long line bycatch mitigation etc) from several Pacific nations, this magnificent albatross has come back from the brink and is now classed as vulnerable and improving. Ref. Wikipedia - short tailed albatross.

My pleasure to share Rach. Seen on a cold, rainy late winter day, seeing this bird and knowing it's back story, brightened my day up considerably!

Thanks for sharing, an amazing recovery story. Great information.

Thank you Dawn and Tukup for your comments. This is quite an amazing bird with quite an incredible history.

Obviously it does quite well with a short tail :-) Great shots Triggs. Thanks for sharing.

That's a interesting find. We had fun learning about the history of this bird!