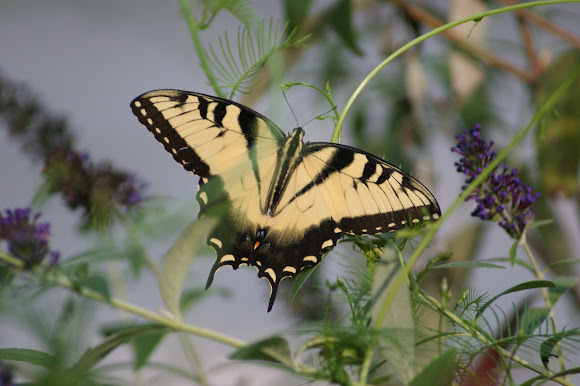 P. glaucus has a wingspan measuring 7.9 to 14 centimeters (3 to 5.5 in). The male is yellow with four black "tiger stripes" on each fore wing. Females may be either yellow or black, making them dimorphic. The yellow morph is similar to the male, but with a conspicuous band of blue spots along the hindwind, while the dark morph is almost completely black.

P. glaucus is found in the eastern United States from southern Vermont to Florida west to eastern Texas and the Great Plains. It is common throughout its range. P. glaucus can be found almost anywhere deciduous forests occur. Common habitats include woodlands, fields, rivers, creeks, roadsides, and gardens. It will stray into urban parks and city yards. This one was photographed at the Silver Bluff Audubon Center near Jackson (Aiken County), SC.

Adults use a wide range of food sources, most preferring to nectar on sturdy plants with red or pink flowers. Many members of the families Apocynaceae, Asteraceae, and Fabaceae are used as common nectar sources. This one was feeding on Cypress Vine planted at the Visitors Center.