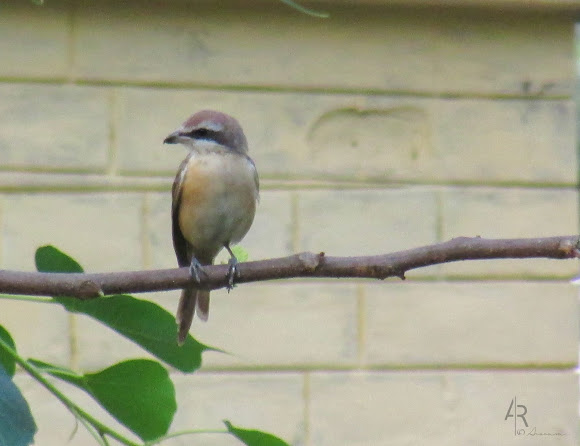 This shrike is mainly brown on the upper parts and the tail is rounded. The black mask can be paler in winter and has a white brow over it. The underside is creamy with rufous flanks and belly. The wings are brown and lack any white "mirror" patches. Females tend to have fine scalloping on the underside and the mask is dark brown and not as well marked as in the male. The distinction is not easy to use in the field but has been tested with breeding birds in Japan where the female can be identified from the presence of a brood patch. The use of multiple measurements allows discrimination of the sex of about 90% of the birds. Subspecies lucionensis has a grey crown shading into the brown upper parts and the rump appears more rufous than the rest of the upper back. The tail is more brownish and not as reddish as in the red-backed shrike. Younger birds of lucionensis have a brown crown and lack the grey on the head. Sub species superciliosus has a broad white supercilium and a richer reddish crown. The tail is redder and tipped in white.

Like most other shrikes, it has a distinctive black "bandit-mask" through the eye and is found mainly in open scrub habitats, where it perches on the tops of thorny bushes in search of prey. Several populations of this widespread species form distinctive subspecies which breed in temperate Asia and migrate to their winter quarters in tropical Asia. They are sometimes found as vagrants in Europe and North America.

♦ Thanks to Sukanya Mam [@SukanyaDatta] for the ID.

Thank you Mam for the ID...@SukanyaDatta