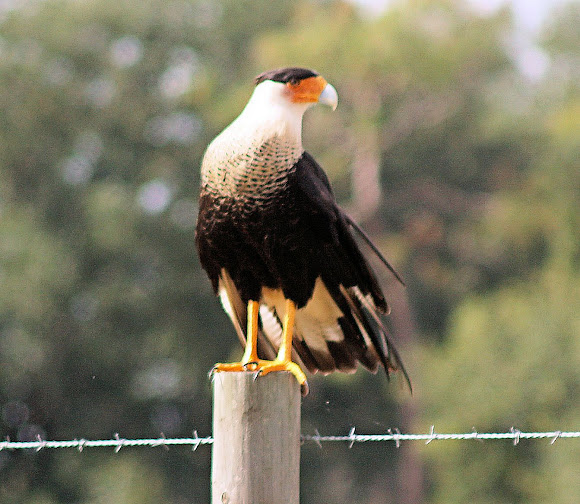 Desert scrub habitat near cattle ranch land. My favorite raptor. While going to Sebring you can bet that you will see this individual before the Kissimee River. This member of the remnant Florida species of Caracara is threatened, They are fairly comfortable with humans in relatively close proximity. Seem to like walking as much as flying.

The state of Florida in the United States is home to a relict population of Northern Caracaras that dates to the last glacial period, which ended around 12,500 BP. At that point in time, Florida and the rest of the Gulf Coast was covered in an oak savanna. As temperatures increased, the savanna between Florida and Texas disappeared.[11] Caracaras were able to survive in the prairies of central Florida as well as in the marshes along the St. Johns River. Cabbage Palmettos are a preferred nesting site, although they will also nest in Southern Live Oaks.[12] Their historical range on the modern-day Florida peninsula included Okeechobee, Osceola, Highlands, Glades, Polk, Indian River, St. Lucie, Hardee, Desoto, Brevard, Collier, and Martin counties.[13] They are currently most common in DeSoto, Glades, Hendry, Highlands, Okeechobee and Osceola counties.[14] Loss of adequate habitat caused the Florida Caracara population to decline, and it was listed as threatened by the United States Fish and Wildlife Service in 1987.[13]

one of my favorites. Can see them anytime I'm West Okeechobee Florida

Very nice! I've never been lucky enough to see one of these striking birds.

Thank you @Maria dB and @auntnance123

Very nice spotting and great information. I have seen them several times in the Viera area of Brevard county (alas no photo yet).
It appears,also, that you have mistakenly placed the spotting in the ..Eyes Have It mission which is restricted to KS, OK, and MO.