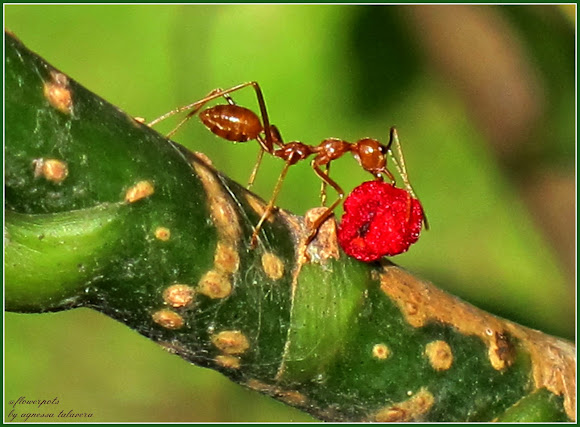 Spotted these ants carrying some red thingies (I don't have any idea what they are), and some ants are carrying other ants (like in pic# 5). Oecophylla smaragdina Fabricius, 1775, called Weaver Ant, Green Ant, Green Tree Ant, and Orange Gaster, is a species of arboreal ant found in Asia and Australia. They make nests in trees made of leaves stitched together using the silk produced by their larvae. Weaver ants may be red or green. In Tagalog, they are called Hantik. Weaver ants are sometimes used by indigenous farmers, particularly in Southeast Asia, as natural biocontrol agents against agricultural pests. The larvae and pupae are collected and processed into bird food, fish bait and in the production of traditional medicines in Thailand and Indonesia.

Do these guys attack as painfully and readily as their Australian cousins?

Thanks Chief and Kranti! :)

Fantastic Agnes. I'd like a movie next time please :-)

Thanks Mayra and Adi :)

Such a nice series Agnes! Great!

Thanks Leana and J :)

Thanks Yuko and Carol! :)