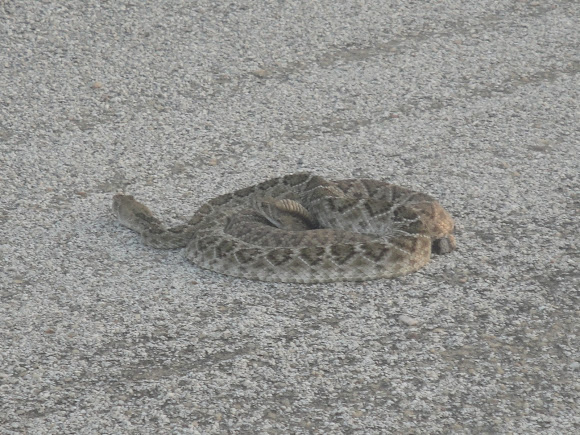 Characterized by the "diamond" shapes down the back, western diamondbacks also have a black-and-white striped tail and a dark stripe through the eye. Coloration can vary by area, with some snakes that are darker or have more contrasting colors. The snakes on MI tend to be more overall beige/gray with less contrast.

Western diamondbacks are found in many different types of habitats. Matagorda Island is primarily grassland with some marsh and a few scrubby trees.

There are actually 2 snakes in each photo. I caught them mating in the early morning on an abandoned runway. I took these (somewhat-blurry) photos and left them to it. Matagorda Island is managed by the Aransas NWR.

Yea, I was surprised when I found these two. I suppose they could be doing something other than mating...but I was afraid to disturb them by sticking around.

I would have never even noticed there were two snakes in the photo if you hadn't said something, very cool!