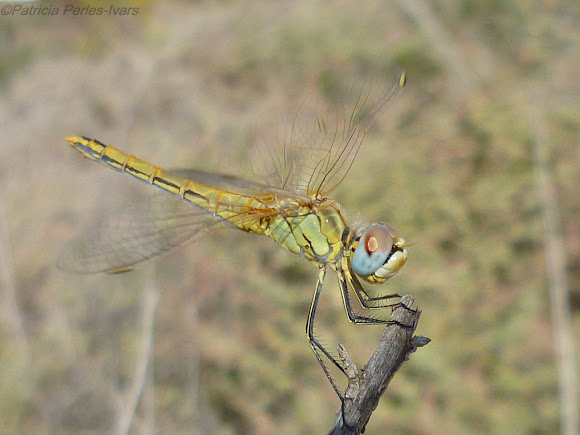 S. fonscolombii is similar to other Sympetrum species but a good view with binoculars should give a positive identification, especially with a male. Males have a red abdomen, redder than many other Sympetrum species. The wings have red veins and the wing bases of the hind-wings are yellow. The pterostigma are pale with a border of black veins and the underside of the eye is blue/grey. The female is similar but the abdomen is yellow, not red, and the wings have yellow veins, not red veins as found in the males. The legs of both sexes are mostly black with some yellow. Immature males are like females but often with more red.

Occurs in much of central and southern Europe including most Mediterranean islands, in Africa, the Middle East and south-western Asia including India, Sri Lanka, and Mongolia. In Europe it is resident in the south of its range but in some years it migrates northward and has been found as far north as Belgium, Sweden, Finland, Poland and northern England. It is the only libellulid to be found in the Azores and it is also found on the Canary Islands and Madeira. It is found in all sorts of still water but being a migrant it is often found away from water. It has been seen flying over the sea.

thank you @tmvdh for the correction!
:)

I have to agree with tmvdh on this one, the common has pale brown (sandy) lower eyes. I actually have a spare Dragonfly field guide, brand new, unused, which covers all dragonflies in Europe in great detail if anyone is interested. Was planning to keep it for when the grandchildren get old enough to be interested but that may be several years away yet!

It's a female of Sympetrum fonscolombii (see the blue lower part of the eyes).