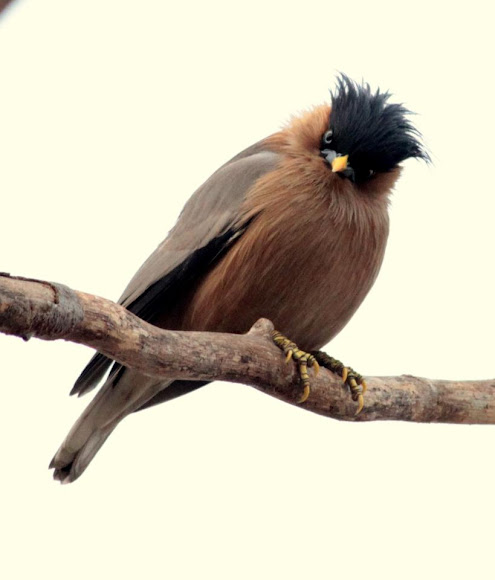 This myna is pale buff creamy with a black cap and a loose crest. The bill is yellow with a bluish base. The iris is pale and there is a bluish patch of skin around the eye. The outer tail feathers have white and the black primaries of the wings do not have any white patches. The adult male has a more prominent crest than the female and also has longer neck hackles. Juveniles are duller and the cap is browner. The species name pagodarum is thought to be based on occurrence of the species on buildings and temple pagodas in southern

It is a resident breeder in Nepal and India, a winter visitor to Sri Lanka and a summer visitor in parts of the western Himalayas and northeastern Himalayas. They have musical call notes that are long made up of a series of slurred notes that ends abruptly. Although mainly seen on the plains there are a few records from above 3000m mainly from Ladakh. This passerine is typically found in dry forest, scrub jungle and cultivation and is often found close to human habitations. The especially favour areas with waterlogged or marshy lands.

Like most starlings, the Brahminy Starling is omnivorous, eating fruit and insects. They have been known to feed on the fruits of Thevetia peruviana which are toxic to many vertebrates. These birds are not as arboreal as the Grey-headed Mynas and they form small flocks that mix with other mynas on grass covered ground. The sometimes forage beside grazing cattle. They also visit flowers for nectar, particularly Salmalia, Butea monosperma and Erythrina. They roost communally in large numbers in leafy trees, often in the company of parakeets and other mynas. It builds its nest in tree holes or artificial cavities. The breeding season is March to September but varies with location, being earlier in southern India. Both sexes take part in nest building. The nest is lined with grass, feathers and rags. The normal clutch is 3-4 eggs which are pale bluish green. The eggs hatch in about 12 to 14 days. Two or three broods may be raised in succession. It was known as shaṇkarā in Sanskrit and compared to a parivrājikā (female ascetic wanderer) in the Mahābhāṣya due to its serene appearance; the English name may reflect this or refer to the traditional Brahmin choti hairstyle.

Welcome to Project Noah, YogeshDelhite. This is a lovely spotting full of information and a delightful picture.