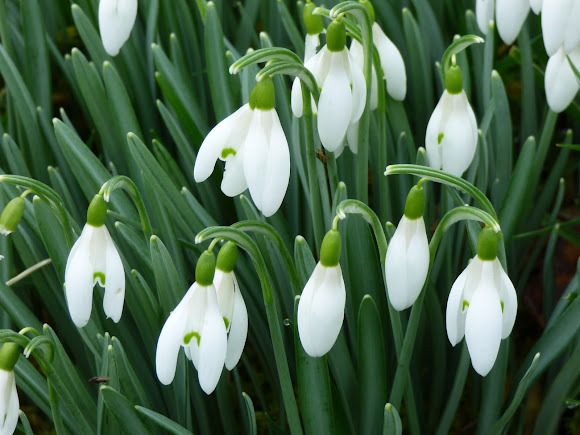 The bulb is more or less spherical to ovoid, 2–2.2 cm x 1.1–1.5 cm. The leaves are applanate in vernation (are held flat against each other in bud), more or less linear and 5-15 x 0.4-0.8 cm at flowering. The leaves are smooth and semi-glaucous (dull greyish green). The green scape (the leafless, flower-bearing stalk) is 7–15 cm long and bears a single erect flower bud, which later becomes pendent (hangs down). The flowers are composed of six white perianth segments (petals and sepals which are similar in appearance), the inner three of which are smaller and have a notch in the tip, above which is a green inverted V- to inverted U-shaped mark. The fruit is a more or less spherical capsule, 1–1.2 cm in diameter. The pale brown seeds are about 0.4 cm long.

The common snowdrop occurs throughout Europe, from the Pyrenees eastward to the Ukraine, and from Germany and Poland southwards to southern Italy, Albania and northern Greece. It is found at 100–1,400 m above sea level (although it most commonly occurs at 300–600 m). It is considered to be introduced and naturalized in northern Europe, including the British Isles where it is not native

Galanthus nivalis is popular with gardeners because it is easy to grow and because a large number of cultivars and clones are available. Once planted they increase freely, producing new bulbs as offsets, and large and impressive drifts can be easily obtained after some years. Snowdrops should be planted in dappled shade, in soil that is well-drained but not completely dry in summer. If planted in grass they should be left to die back before the grass is cut.