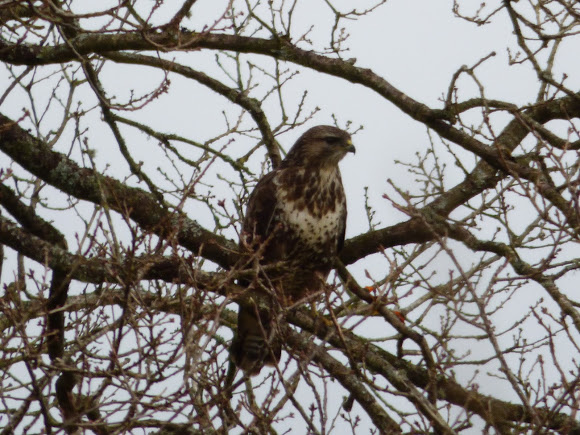 Buzzards are smaller than golden eagles but just as formidable as predators. These imposing hunters drop down on rabbits and small mammals from slow or hovering flight or from a perch. Having snatched their prey in powerful talons, they nearly always make their kill on the ground. In recent years, the population of British buzzards has exploded, and now thrives in areas where there were once only a few, such as Cheshire, Northamptonshire and the Lothians. They inhabit forests and areas of scattered woodland. During the breeding season, buzzards perform spectacular aerial displays, circling high in the sky before tumbling down towards the ground.

The Common Buzzard breeds in woodlands, usually on the fringes, but favours hunting over open land. It eats mainly small mammals, and will come to carrion. A great opportunist, it adapts well to a varied diet of pheasant, rabbit, other small mammals to medium mammals, snakes and lizards, and can often be seen walking over recently ploughed fields looking for worms and insects.

Buzzards do not normally form flocks, but several may be seen together on migration or in good habitat. The Victorian writer on Dartmoor, William Crossing, noted he had on occasions seen flocks of 15 or more at some places. Though a rare occurrence, as many as 20 buzzards can be spotted in one field area, approximately 30 metres apart, so cannot be classed as a flock in the general sense, consisting of birds without a mate or territory. They are fiercely territorial, and, though rare, fights do break out if one strays onto another pair's territory, but dominant displays of aggression will normally see off the interloper. Pairs mate for life. To attract a mate (or impress his existing mate) the male performs a ritual aerial display before the beginning of spring. This spectacular display is known as 'the roller coaster'. He will rise high up in the sky, to turn and plummet downward, in a spiral, twisting and turning as he comes down. He then rises immediately upward to repeat the exercise.