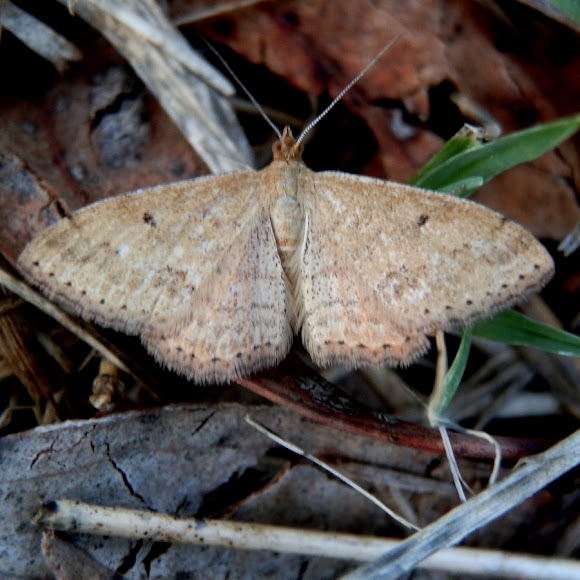 This geometrid moth was mostly brown with thin grey wavy patterns on the both wings and a broader grey pattern along the outer margin that forms a "y" shape at the costa. Visible here are two small black spots on the fore wings. Each hind wing also has a similar spot but not seen here. The hind wings appeared to have a pale tinge of pink and a peppering of (dark) spots closer to the base. Antennae - feathery suggesting that this is a male Spotting of a darker version in March 2013 http://www.projectnoah.org/spottings/194...

Mrtin, thanks for looking a this. I am still a little confused. These 2 links are of S.optivata and have little similarity to my spotting:
http://www.flickr.com/photos/dhobern/300...
http://www.pbase.com/image/130942566

I think this is scopula optivata, based on the row of dots along the outer wings and the central dots too. I base my opinion on Peter Marriot which I cannot link for you. http://www.andrewisles.com/all-stock/pub... http://fr.academic.ru/dic.nsf/frwiki/152... This link I disagree with. http://www.brisbaneinsects.com/brisbane_...

Much better example than my last one. Nice.