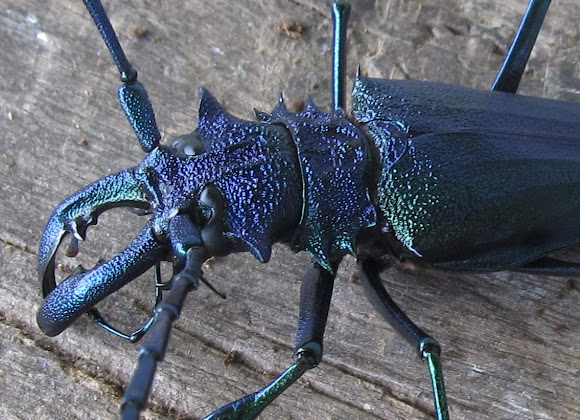 I found no common name other than the familiar name: “Longhorn Beetle.” This remarkably colored beetle is in the Prioninae, a subfamily of Cerambycidae (Long-horned beetles). True to its name, its antennae are longer than its body, This beetle was 65 mm long which is the maximum size they reach. Its defense isn’t limited to the impressive 2 cm long mandibles, the head, prothorax and leading tip of the elytra are armed with very sharp spines. The surface of its entire body appears to have an iridescent metallic purple textured appearance.

This beetle was found under a light in the Amazon rainforest of SE Ecuador (700 masl).

I almost couldn't believe my eyes when I found this beetle. Not only was it huge, but the colors were unbelievable. Little could be found of its habits or habitat, but the majority of the Prioninae whose biology is known are borers whose larvae feed on rotting wood or roots. There is an interesting video at the following link: https://www.shutterstock.com/video/clip-...

Thanks Saturniidae. I think you're right. I have made the corrections.

Thanks Rhynoctapu. It was a gem.

Thanks Ornithoptera. One of the highlights of our time here. It was impressive.

What a huge and beautiful long horn beetle, Tukup.

Wow Leuba. I see I completely missed replying to you. So sorry. I do appreciate your comments. Thanks.

Thanks Neil. It is a beauty.

Thanks Mark. Definitely a "star" in my sightings.

Thanks Dan. Definitely a highlight for me. If you didn't watch the video in the notes, be sure not to miss it.

Thanks Mauron. I think you summed it up quite nicely :-)

Thanks Neil. Don't know how I missed you before. I appreciate your comments.

Thanks Michael and Lauren. I have no idea how rare they actually are, but this is the only one I've seen in 33+ years here. It was definitely one of the highlights of my spottings.

I would faint in excitement to find one of these!

Wow, never seen this before!! Amazing shot in the sun ith that awsome sparkle to the carpace!!

Thanks Antonio. The close up came out even better than I'd hoped. An amazing creature.

Great find Tukup,beautiful,congrats and thanks for sharing

Hi Adrian. I got a notice regarding your comment, but don't see it here. So if you see this, thanks. I appreciate your interest in a beautiful "terrible" beetle :-)

Impressive ! That is a great shot of the head.