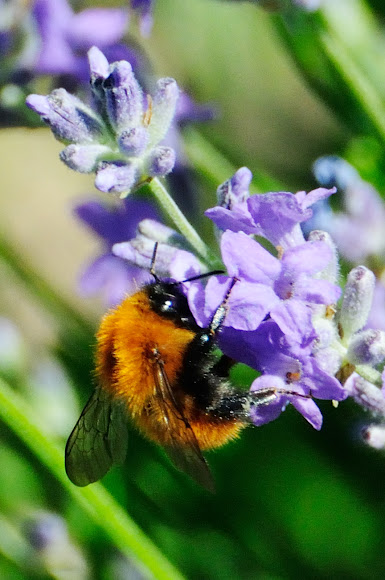 Bumblebee belonging to the family Apidae. The body size is 9–15 millimetres in the case of a worker. Its wingspan 20–28 millimetres. The thorax is yellowish or reddish-brown. The first 4 abdominal segments have grayish hair, while the fifth and sixth tergite hairs are yellowish or reddish brown. However the species is quite variable in color. This one belongs to the dusmeti subspecies. Queens appear between early April to mid-May, workers at the end of April/early May to mid-October. When Queens search for suitable places to nest, they fly just above the vegetation, for example on forest edges, investigating cavities such as holes in the ground or niches in dead wood and grass. The Queen collects moss and grass to form a small, hollow sphere whose walls are partly bonded with wax and sealed off. Within this is formed a large bowl of brown wax of about five millimeters, which is filled with pollen. With the Queen the entire nest dies, usually in September. Occasionally, individuals survive until October/November. Only the last-hatched females survive, to mate with males. Then they fly in search of a safe place for hibernation.