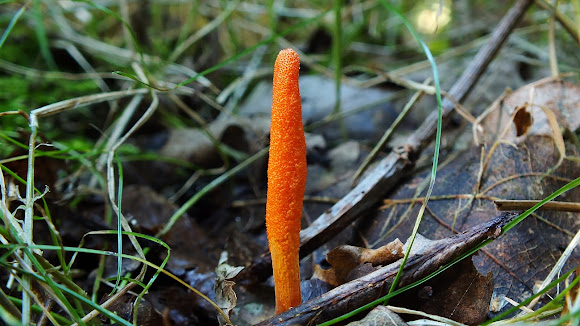 The genus Cordyceps consists of clublike parasites that attack underground puffballs or insects. The puffball-parasitizing species are cool enough, but the bug parasites are astounding. They erupt from insects, bringing to mind the infamous scene in Alien in which John Hurt has a very bad meal. Cordyceps militaris is the best-known and most frequently collected bug-killing Cordyceps. The victim for Cordyceps militaris is a pupa or larva, usually of a butterfly or moth. Its mycelium colonizes the living insect and mummifies it, keeping it alive just long enough to generate the biomass it needs to produce the mushroom, a "spore factory", that allows the Cordyceps to reproduce. With Cordyceps militaris the bug is buried in the ground or in well decayed wood, which means the mushroom collector usually sees only a little orange club with a finely pimply surface. 0.5 to 4 cm long and 2 to 4 mm in diameter, the fertile head is bright orange or scarlet-orange. Club-shaped and slightly swollen, rarely branching, granular, covered in raised pores. The base is attached to a dead insect pupa below the soil surface. The infertile stem is 1 to 3 cm long and 1 to 1.5 mm in diameter, usually somewhat wavy, paler orange than the fertile head.

In grassland or on mossy woodland edges, always attached to a moth pupa, or exceptionally to a larva, below the ground.