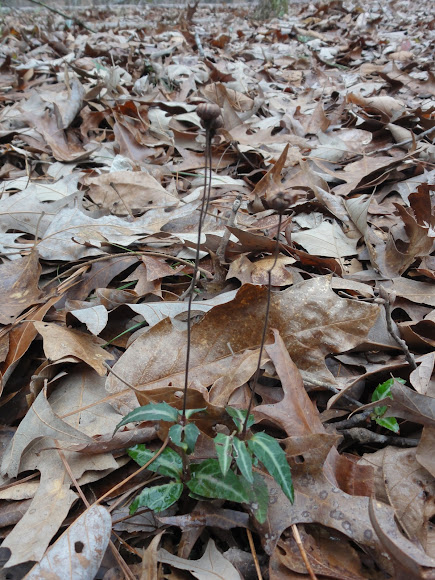 Although one of the common names of this species is "Spotted Wintergreen" this plant is NOT the edible wintergreen used to flavor candies and other savory treats. Native Americans used its leaf tea to treat rheumatism and stomach problems, and crushed leaves were applied as a poultice to sores and wounds. It has dark green, variegated leaves 2-7 cm in length, and 6-26 mm in width. The variegation of the leaves arises from the distinct white veins contrasted with the dark green of the leaf. The stems emerge from creeping rhizomes. The nearly round flowers, which appear in late July to early August, are found on top of tall stalks. They are white or pinkish and are insect pollinated. The flowers mature to small (6 to 8 mm in diameter) capsules bearing the seeds of the plant, which are dispersed by the wind.

Native to eastern North America and Central America, from southern Quebec west to Illinois, and south to Florida and Panama. It can be found in sandy habitats, well-drained upland forests, oak-pine woods, and similar mesic habitats. It is very tolerant of acidic soil. Spotted wintergreen is endangered in Canada, as there are four living populations in southern Ontario, and there is one extremely small extant population in Quebec. It is also endangered in Illinois and Maine. In New York it is considered Exploitably Vulnerable.