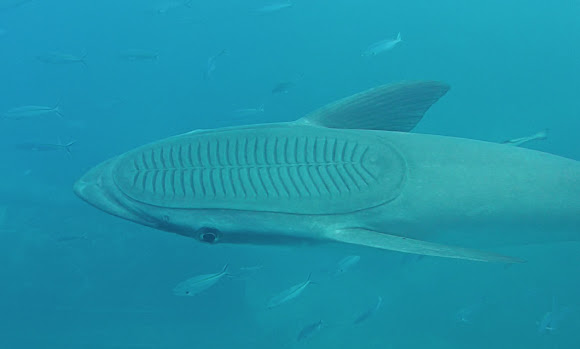 The remoras, sometimes called suckerfish, are a family (Echeneidae) of ray-finned fish in the order Perciformes. They grow to 30–90 cm (0.98–2.95 ft) long, and their distinctive first dorsal fins take the form of a modified oval, sucker-like organ with slat-like structures that open and close to create suction and take a firm hold against the skin of larger marine animals. By sliding backward, the remora can increase the suction, or it can release itself by swimming forward. Remoras sometimes attach to small boats. They swim well on their own, with a sinuous, or curved, motion.

Remoras are primarily tropical open-ocean dwellers, occasionally found in temperate or coastal waters if they have attached to large fish that have wandered into these areas. In the mid-Atlantic, spawning usually takes place in June and July; in the Mediterranean, it occurs in August and September. The sucking disc begins to show when the young fish are about 1 cm (0.4 in) long. When the remora reaches about 3 cm (1.2 in), the disc is fully formed and the remora can then attach to other animals. The remora's lower jaw projects beyond the upper, and the animal lacks a swim bladder. Some remoras associate primarily with specific host species. They are commonly found attached to sharks, manta rays, whales, turtles, and dugongs (hence the common names "sharksucker" and "whalesucker"). Smaller remoras also fasten onto fish such as tuna and swordfish, and some small remoras travel in the mouths or gills of large manta rays, ocean sunfish, swordfish, and sailfish. The relationship between a remora and its host is most often taken to be one of commensalism, specifically phoresy. Though it was originally thought that the host to which it attaches for transport gains nothing from the relationship, research indicates that hosts also benefit, given that remoras feed on parasites (such as copepods) and clean sloughing epidermal tissue as well as ingesting scraps of food, feces, and small nekton and zooplankton. The remora benefits by using the host as transport and protection, and also feeds on materials dropped by the host. Controversy surrounds whether a remora's diet is primarily leftover fragments, or the feces of the host. In some species (Echeneis naucrates and E. neucratoides), consumption of host feces is strongly indicated in gut dissections. For other species, such as those found in a host's mouth, scavenging of leftovers is more likely. On rare and even more rarely filmed occasions, such as the 2010 episode of Shark Week known as "Shark City", remoras that associate with sharks may end up as their prey as was the case of a lemon shark devouring a remora that attempted to adhere to it

Pic#1 shows close-up of the 'sucker' of the Remora on the back of its head.

Yes, they are, @Mackenzie
A bit under appreciated by Divers though :D