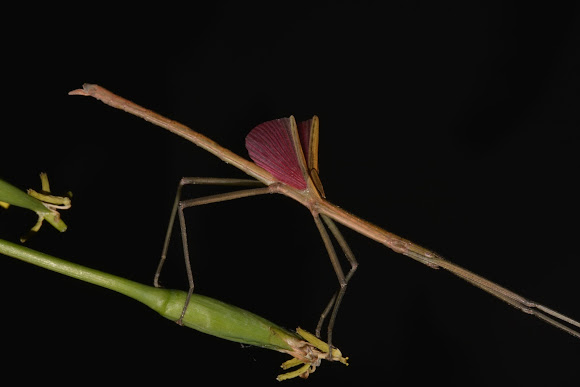 Phasmid of the species, Graeffea crouani, also called Coconut Stick Insect among the locals as they are mostly found among Cocount trees and considered as Pests. Both Males and Females have small wings and not capable of flight. Males have bigger wings which he opens up as defensive display when touched. Females not capable to do that. This species is capable to spray a chemical from glands behind their head. The liquid is quite strong and doesn't smells foul or bad. Pic#1 - Adult Male in defensive or threat display showing nice pink wings Pic#2 - Adult Female, brown Pic#3 - Adult Female, green Pic#4 - Pair of Adults, smaller brown is the Male and bigger green is the Female Pic#5 - 2 nymphs in different colours

Found mainly on Cocounut Trees and also other palms and pandanus. Saw more than a hundred of them within the garden area of the Resort I am staying at.

Thanks for the nomination, @Ashley :)

Thanks, @Ingrid3 for your appreciation :)

What a fabulous sequence! Great images of the cryptic vs. flashy display!