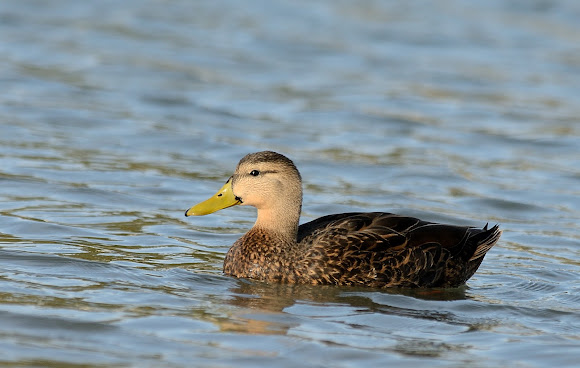 The only duck adapted to breeding in southern marshes, the Mottled Duck is a dull relative of the Mallard. It is in danger of being displaced by introduced Mallards, primarily because of hybridization. There are two distinct populations of Mottled Ducks. One population, A. fulvigula maculosa (Mottled Duck), lives on the Gulf of Mexico coast between Alabama and Tamaulipas (Mexico); outside the breeding season individual birds may venture as far south as to Veracruz. The other, A. fulvigula fulvigula (Florida Duck), is resident in central and south Florida and occasionally strays north to Georgia. The same disjunct distribution pattern was also historically found in the local Sandhill Cranes. The adult Mottled Duck is 44–61 cm (17–24 in) long from head to tail. It has a dark body, lighter head and neck, orange legs and dark eyes. Both sexes have a shiny green-blue speculum (wing patch), which is not bordered with white as with the Mallard. Males and females are similar, but the male's bill is bright yellow, whereas the female's is deep to pale orange, occasionally lined with black splotches around the edges and near the base. The plumage is darker than in female Mallards, especially at the tail, and the bill is yellower. In flight, the lack of a white border to the speculum is a key difference. The American Black Duck is darker than most Mottled Ducks, and its wing-patch is more purple than blue. The behaviour and voice are the same as the Mallard. Mottled Ducks feed by dabbling in shallow water, and grazing on land. They mainly eat plants, but also some mollusks and aquatic insects. The ducks are fairly common within their restricted range; they are resident all-year round and do not migrate. The breeding habitat is coastal marshes. The nest is built on the ground amongst vegetation, such as bull-rush and marsh grass.