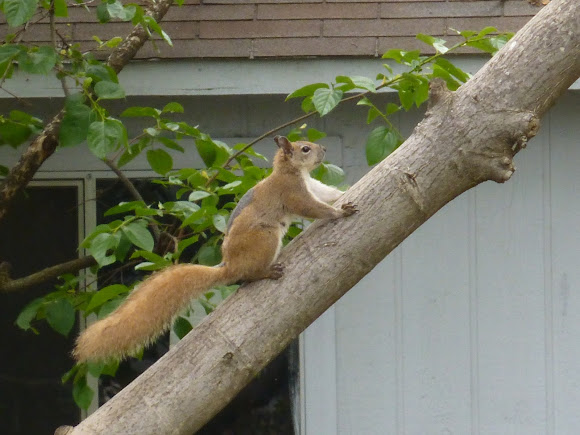 An adult Gray Squirrel weight ranges from approximately 450 to 950 grams, (15.8 ounces to 33.5 ounces), with a nose-to-tail length of 44 to 70 centimeters, (17 inches to 27.5 inches). The pictured adult is about 16 + ounces and 20+ inches long. Normally their color is a gunmetal silver / gray with a white underside. This squirrel is more of a light reddish - brown color except for one rectangle spot on her back that is silver - gray. Its underside is white.

The western gray squirrel is most often found in mixed oak woodland, mixed oak-conifer woodland, mixed conifer forest, walnut mixed forest and in cottonwood or sycamore dominant woodlands. Typically the gray squirrel is restricted to elevations less than 2000 meters, although some sources report occurrences at higher elevations in a portion of the northern Sierra Nevada Range and San Bernardino Mountains. The gray squirrel is chiefly arboreal, but does engage in terrestrial activity where trees are less dense. Terrestrial activity are also associated with ground foraging for acorns, conifer seeds and sometimes berries & other fruit; ground foraging is most common in mornings and late afternoon. The back of my home has 8 nut trees and the surrounding Gray Squirrels have laid clam to them. This one is a female. During late spring I can tell she is nursing her young.

Gray squirrels was first described by George Ord in the year 1818, based upon accounts conveyed by the Lewis and Clark expedition from observations near the mouth of the Columbia River. I have at least six different squirrels that visit my back orchard of nut trees. Other than this one, they are hard to tell apart.

Western grey squirrels are all over silver. This looks to be an introduced fox squirrel. Sciurus niger