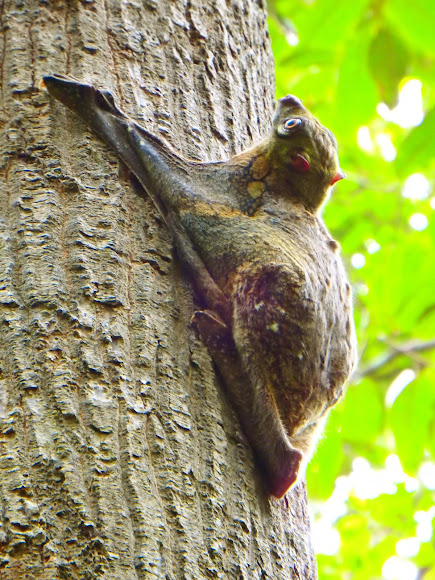 In spite of its name the Sunda flying lemur is not really a lemur and does not fly. Instead, it glides as it leaps among trees. It is strictly arboreal, is active at night, and feeds on soft plant parts such as young leaves, shoots, flowers, and fruits. It is a skillful climber, but is helpless when on the ground. Its gliding membrane connects from the neck, extending along the limbs to the tips of the fingers, toes and nails. This kite-shaped skin is known as a patagium, which is expanded for gliding. It can glide over a distance of 100 m with a loss of less than 10 m in elevation. The Sunda flying lemur is protected by national legislation. In addition to deforestation and loss of habitat, local subsistence hunting poses a serious threat to this animal.

Sepilok, Sabah. Seen in Rainforest Discovey Center. It is basically a part of the forest with trails and canopy walks. Animals are in the wilderness.

Thank you for your nice comments, Dr.Namgyal, :-)