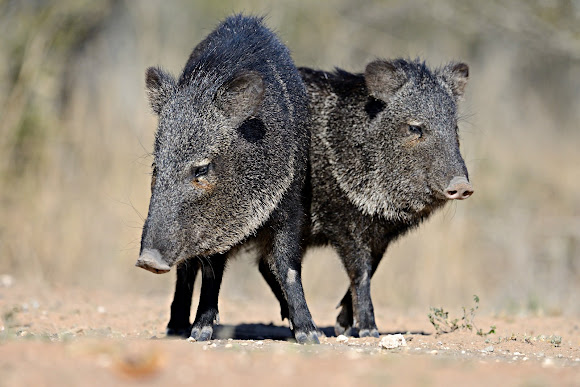 Although similar in appearance to a pig, it is a collared peccary. Along evolutionary lines, a collared peccary is a distant relative of wild pigs and hippos. Scientists know it as Pecari tajacu.** Biologists say the confusion probably started as soon as European explorers arrived in the New World. The javelina is native to the Western Hemisphere, while true pigs developed in the Eastern Hemisphere. Distinguishing characteristics include size. Javelinas are small and compact, weighing from 30 to 55 pounds, while adult feral hogs can reach 100 pounds or more. Javelinas are a grizzled brown and black with a white band of coarse hair, its "collar," around the neck. Feral hogs come in a variety of colors and combinations of colors. Less obvious differences include that the javelina has four-hoofed toes on its front feet, but only three-hoofed toes on the hind feet, where the outer dewclaw present on a pig is absent in javelinas. Javelinas also have shorter tails and their canine teeth or "tusks" grow vertically rather than away from the face.

Javelinas are commonly found in dense thickets of prickly pear, chaparral, scrub oak, or guajillo in the brush country south of San Antonio, and over wide areas of the Edwards Plateau and the Trans-Pecos. They can also be found throughout Mexico and Central America and well into South America. They travel in bands ranging from a few animals to as many as 45. They have a musk gland on their rump which gives them their characteristic smell. This gland is used to mark their "territory" and allows individuals to keep in contact with the herd.

Congrats Susan for your SOTD!

Wow! I never heard of these. I really need to go to Texas! Great spot

thanks Antonio...you are too kind and I appreciate your comment.

Great spoting Susan,amazing capture,congrats on the SOTD and thanks for sharing such an amazing spotting page

thanks Karen for choosing my Javelina as SOTD!! I am besides myself!