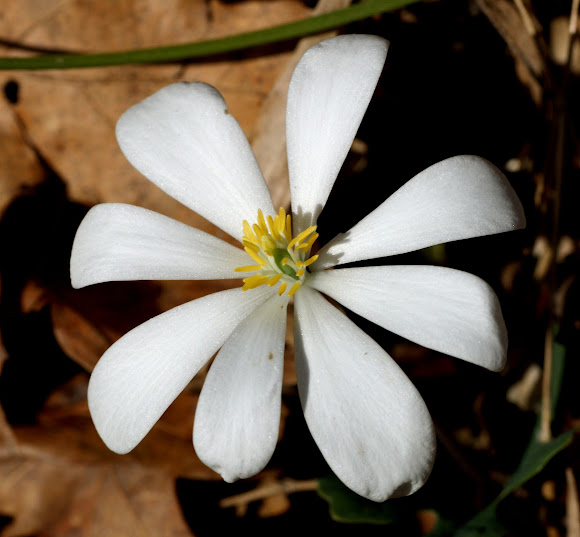 Bloodwort is a perennial, herbaceous flowering plant. It is a variable species growing from 20–50 centimetres (7.9–20 in) tall, normally with one large, sheath-like basal multi-lobed leaf up to 12 centimetres (4.7 in) across. Bloodroot stores sap in an orange colored rhizome, that grows shallowly under or at the soil surface. Over many years of growth, the branching rhizome can grow into a large colony. Plants start to bloom before the foliage unfolds in early spring and after blooming the leaves expand to their full size and go summer dormant in mid to late summer.

It is native to eastern North America from Nova Scotia, Canada southward to Florida, United States, and west to Great Lakes and down the Mississippi embayment. This one was photographed at Stevens Creek Heritage Preserve in McCormick County, SC.

It is also known as bloodroot, red puccoon root, and sometimes pauson. Bloodroot is one of many plants whose seeds are spread by ants, a process called myrmecochory. The seeds have a fleshy organ called an elaiosome that attracts ants. Bloodroot produces benzylisoquinoline alkaloids, primarily the toxin sanguinarine. The alkaloids are transported to and stored in the rhizome. Comparing the biosynthesis of morphine and sanguinarine, the final intermediate in common is (S)-reticuline. Bloodroot was used historically by Native Americans for curative properties as an emetic, respiratory aid, and other treatments. Products containing bloodroot are strongly associated with the development of oral leukoplakia, which is a premalignant lesion that may develop into oral cancer. Sanguinarine kills animal cells by blocking the action of Na+/K+-ATPase transmembrane proteins. As a result, applying bloodroot to the skin may destroy tissue and lead to the formation of a large scab, called an eschar. Bloodroot and its extracts are thus considered escharotic.