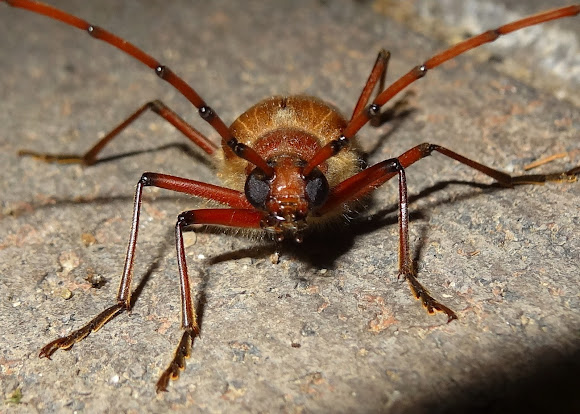 Large native Longhorn Beetle. Males grow to 35mm body length with antenna at least that again. (Females have shorter antenna.) Also known as the Pale Brown Longhorn, wing casings are a light ginger toned brown with head and thorax a darker shade of the same turning to near black in older beetles. They have large wings but are quite clumsy (although keen) flyers.

Found throughout the New Zealand mainland except Otago. They feed as grubs in live timber, boring holes and pupal chambers in native Beech, Kanuka and Manuka. They have also been recorded feeding on introduced Pin Oak and Juniper Myrtle.

Grubs grow to 65mm and are an important food source for Kaka (native parrot). Adults emerge and fly in early summer and this young male was attracted by house lights.

They certainly are Polilla. A pretty plain bug apart from the whiskers but often overlooked by many NZers.