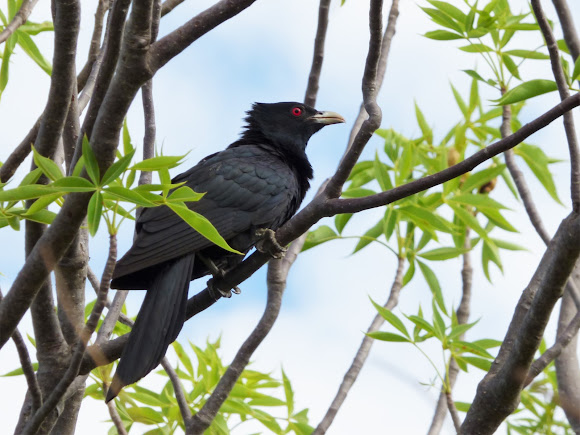 This Cuckoo has an "entirely glossy black plumage, tinged with blue and green, and striking red eye." (Birdlife Australia) Check out the video of its call (https://youtu.be/PBW35zu_gc4 ) - unfortunately I stopped recording before the end of the call...

Causing a ruckus in trees near the waste water treatment wetlands.

Literally as I post this I can hear one calling! In Australia it is also known as the "storm bird" or "rain bird" and it actually rained this morning!!! These shots were taken while two Little Friarbirds (Philemon citreogularis) were attacking it as it sat here in this tree. This is a parasitic Cuckoo and Little Friarbirds are one of the birds it will attempt to use as a host. Initially I heard a huge ruckus so I went on the prowl (not actually expecting to see anything) when this bird came shooting by in front of me. So, I followed it and it sat for a short time - enough for some pics anyway! Further references: The Michael Morcombe eGuide to Australian Birds, Mobile App. "Field Guide to the Birds of Australia", Simpson & Day, 8th Edition, pp154-155