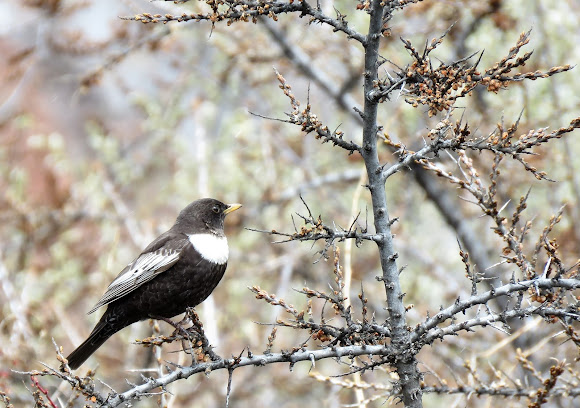 This european thrush is the size of blackbird, and its equivalent in mountainous regions. Portrayed here is male (or, rather "males"), easily recognized by their thrush-like shape, stance and appearance, and this bright-white crescent on chest, and those white panels on wings. The rest of the body is black or dark-brown. Female is duller brown, and her crescent is still visible, but of cream-brown colour.

Seen close to border with Russia, in a very cold valley, surrounded by a very tall Caucasus mountain peaks, some of which reach over 5000m. Valley itself was on some 1900m of altitude, and is regularly beaten by harsh winds. This group of males was seen on edges of an impenetrable thorny-shrub-covered zone, bordering the stream and just below the cliffs.

My holiday trip to Caucasus paid off on my hoby side, as this long-awaited encounter just happened in those beautiful mountains. The Ring Ouzel was one of the birds I was desperately longing to see since long time... No, not a "holy grail", but, yes, I was really strongly wishing for that encounter - there were no particular reason for that; simply one of those wishes. Anyway, in Caucasus mountains, I got that rare opportunity to spend some half an hour observing this group of males; and it was just magical. I found the place totally by chance; I was trying to get a better shot of a large bird of prey that just landed high above me; and stumbled upon that dense growth of shrubs... and there were about 10 of them foraging and playing in that grove; at a first glance, I thought they were blackbirds; they saw me but were not alarmed... I snatched few shots of that raptor, and refocused my attention on thrushes; and realized what (or whom?) I was observing... I kept my distance, and tried doing everything in a real slow-motion; we observed each other for some time; and I got a few shots with birds half hidden; finally some of them got out in the clear, continuing their business ignoring me (Yess!), and I just shot as many shots I wanted; from a maximum of 15 meters distance... That was really brilliant experience; even though I was quite surprised not to see any female?

Wowo. Thank you all for the SOTD and your kind words.

Sometimes it's nice to be ignored. I'm glad you got to see them, and get some terrific shots. I'm happy for you Zlatan. Congratulations on the well-deserved SOTD.

Congratulations Zlatan, your holy grail is our Spotting of the Day:

"Almost all black except a yellow bill, white breast patch and light grey fringes to its flight feathers, this male Ring Ouzel (Turdus torquatus) is our Spotting of the Day! This European member of the thrush family (Turdidae) was photographed by Project Noah member Zlatan Celebic during a trip to remote parts of the Caucasus Mountains in Georgia, from which he brought back many special spottings. Make sure to check them out!
Ring Ouzel: https://buff.ly/2VGcSQM
Zlatan's collection: https://buff.ly/2JXkUQK "

Beautiful series and wonderful notes. Congratulations on getting to see one of your "wish" birds up close and personal!

wow. Many thanks all.

You're on a roll Zlatan! One can feel your enthusiasm about this special encounter ;-) Your spotting has been nominated for the Spotting of the Week. The winner will be chosen by the Project Noah Rangers based on a combination of factors including: uniqueness of the shot, status of the organism (for example, rare or endangered), quality of the information provided in the habitat and description sections. There is a subjective element, of course; the spotting with the highest number of Ranger votes is chosen. Congratulations on being nominated!

Many thanks, Trigs; and yes, it was really great to discover these guys finally!

Lovely series Zlatan. One of my favorite thrushes and always a great find. Congratulations on your encounter and thank you for sharing it with us.