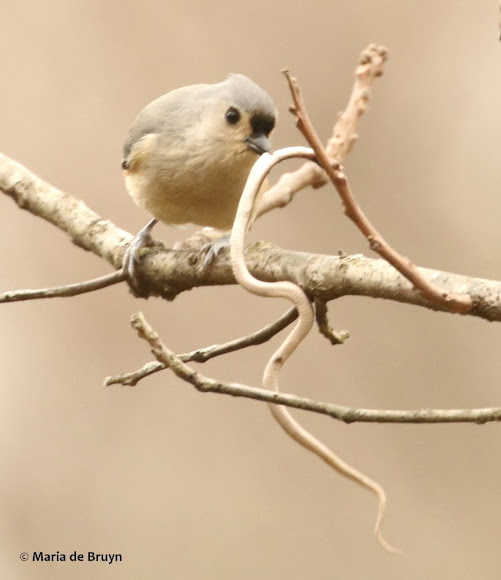 This bird, which usually eats nuts, seeds and insects in the summertime, had caught what I was told was a worm snake (Carphophis amoenus), although someone else suggested it could be some species of brown or earth snake. At one point, the bird flew further away from me and unfortunately dropped the snake in flight near the creek. I remained watching and about five minutes later, the bird had caught the snake again and flew off with it.

The Brumley Nature Preserve North is an area with meadows, woods, a creek and ponds. This bird caught the snake near the creek.

This was a very surprising spotting as I had never heard of titmice eating snakes. They come to my feeders often for nuts and seeds. The bird was very determined to hang on to its catch.

Thank you, triggsturner - a pleasure sharing the honors with you. Hope we both continue to observe interesting bird behaviors!

Thank you, SukanyaDatta and Sergio! Hope you and all other Project Noah members are staying well and healthy!

CONGRATULATIONS, really stunned by this shot.

Oh wow - I didn't know that had happened - thanks for your congratulations and to the team that voted on entries. There is apparently a question about whether this is a worm snake or another species of snake so I'll change the description. But the fact remains that it was really unusual to see this species of bird with a snake.

Thank you for your nice comments, Brian, Mark, Sukanya, Sergio, Daniele and Josh! I have to admit that this was one of my favorite spottings last year. :)