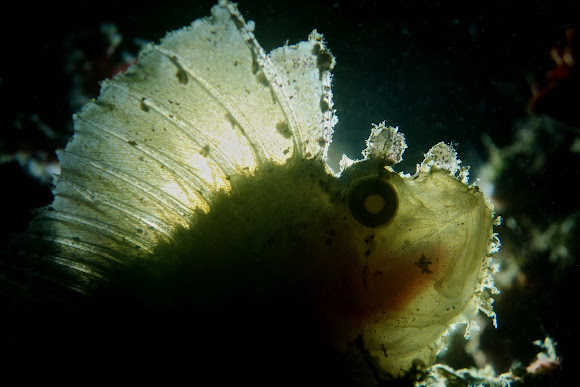 The white version of this fish has translucent dorsal fins and also face. Pic#1 is taken with 'back-light' to show of this feature. Pic#2 is taken in regular mode, to show how the fish looks like. The leaf scorpionfish is about 10 cm (4 in) long. Their color varies from green, red, pink, brown, ocher and yellowish to a ghostly white. The fish is almost as flat as a leaf and resembles a leaf in many other ways. The head and mouth are large. Through their eyes is a dark line. The large dorsal fin starts just behind the eyes and has 12 spines and eight to 11 soft rays. The anal fin has three spines and five or six soft rays. The venom of the leaf scorpionfish is considerably weaker than that of the lionfish and stonefish. The skin often has blotches that enhance a camouflage effect. This fish has appendages around the mouth, and sometimes real algae and hydroids grow on its skin. This fish molts every 10 to 14 days, and can change colors after the moult.

aenianotus triacanthus is widespread from east African coast and the Red Sea to the tropical Indo-Pacific, north to the Galapagos Islands, the Ryukyu Islands, Hawaii, and the coast of New South Wales. This species can be found in tropical waters on coral reefs, from shallow water to a depth of 130 m.