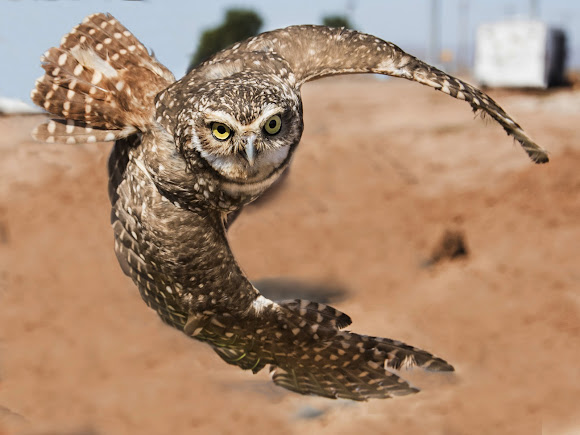 As in the photos…this is a smaller-sized owl, with long legs. They live in burrows dug by other animals including prairie dogs and desert tortoises.

In my November 9th posting on Project Noah, I indicated that the owls pictured were rescued from construction sites in Arizona, and areas in which their habitat is in danger. At that time, volunteers with Wild at Heart and Audubon were in process of constructing burrows in areas where they are safe and are suitable for their continued survival. The burrows are south of Phoenix in Maricopa, AZ, in an open sandy area in the Sonoran Desert.

Free at last! As of this past weekend, the Burrowing Owls were set free to continue their lives in their new ‘digs’. The first 3 photos are of the ‘detainees' prior to and during release. The 4th and 5th are owls next to their new burrows. Those studying the owls have noted that over the past few years, they are laying fewer eggs (the burrows are being monitored during the breeding season, before release). The area has gone through a several year drought, and that with other factors may be slowing the birth rate. Not all of the owls who are relocated stay in their burrows. Some leave, but wild Burrowing Owls in the area populate the vacated burrows.

Thanks Polilla and Michael, much appreciated!

Thanks, Daniele, and all who commented! I totally enjoy being a part of the Noah community. One observation...I have seen quite a number of excellent photos posted all year, but which were not added to the "Best Wildlife Photo" mission. There is a lot of talent out there, and the Best Wildlife mission is a good way to showcase your work.

Awesome series Jim,congrats on the 1st place and thanks for sharing

Congrats on your 1st place Jim. Great shot of a lovely bird.

Congratulations, Jim. It is really a wonderful shot.

Congratulations Jim, this fantastic image is the winner of our 2016 Best Photo contest (Bird category and all categories)!

Just awesome Jim,i miss this one,congrats on the well deserved SOTD and thanks for sharing your amazing spotting page

Congratulations on the spotting of the day! Wonderful photos!

Congratulations on the SOTD! Gorgeous pictures, Jim Nelson. Thank you for sharing their story, hope they all do well in their new environment and lay lots of eggs.... : )

Thanks, Andre! I have some more work to do to catch up to your Spotting of the Week!

Spectacular spot Jim! Congratulations on your photo and for the Spotting of the Day!

Thanks Ashley, and all who viewed and commented! You made my day!

Wow what a series. Congratulations Jim.