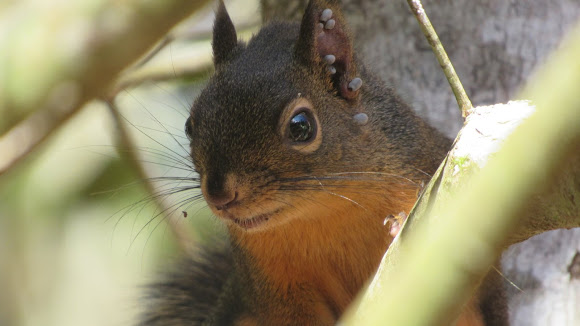 Wikipedia says: Douglas squirrels live in coniferous forest habitats along the Pacific Coast, from the Sierra Nevada (mountains) of California, northwards to the southwestern coast of British Columbia. Tamiasciurus douglasii prefer old-growth forests or mature second-growth forests, and some authors regard them as dependent on its presence. They essentially replace the American Red Squirrel, which inhabits the coniferous forests of the rest of North American, in these areas. The two species have very minimal overlap in territory.

Wikipedia says:The Douglas squirrel (Tamiasciurus douglasii) is a pine squirrel found in the Pacific Northwest of North America, including the coastal states of the United States as well as the southwestern coast of British Columbia in Canada. It is sometimes known as the chickaree or pine squirrel, although these names are also used for the American red squirrel.

This poor squirrel has ticks in its ears! This example fits in perfectly with the 2019 Best Wildlife Photo mission. There are two species interacting with one another. Little blood-suckers, and a cute Douglas Squirrel.

Nice capture!!
Living in Oregon we are swarmed with douglas squirrels and have a love hate relationship with them. They will try and colonize wall space and crawl spaces, experiment to conquer bird feeder baffles and terrorize our apple trees.