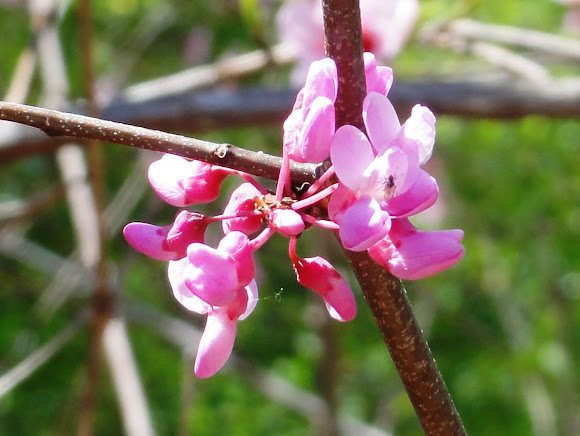 Native Americans consumed redbud flowers raw or boiled, and ate roasted seeds. In some parts of southern Appalachia, green twigs from the eastern redbud are used as seasoning for wild game such as venison and opossum. Because of this, in these mountain areas the eastern redbud is sometimes known as the spicewood tree. Cercis canadensis L. (eastern redbud) is a large deciduous shrub or small tree, native to eastern North America from Southern Ontario, Canada south to northern Florida. The flowers are showy, light to dark magenta pink in color, 1.5 cm (½ inch) long, appearing in clusters from Spring to early Summer, on bare stems before the leaves, sometimes on the trunk itself. To me, this is such an exotic looking flower when viewed up close.

In the wild, eastern redbud is a frequent native understory tree in mixed forests and hedgerows.

Spotted in wooded ravine behind and between warehouses in Kennesaw, GA this is a very "busy" area with many species of birds interacting. While I was taking pictures of this tree and one beside it, I found that I was practically standing on a nest full of baby bunnies!