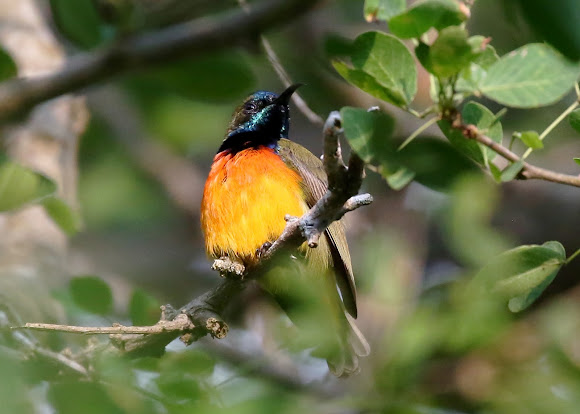 Smaller sunbird at 11cm. Males, a light olive dorsal surface with iridescent purple forehead, throat and bib. Upper breast a brilliant flame orange fading to yellow down to the vent. Females light olive above, yellow paling to white below and has a distinct pale stripe above the eye.

Found on a few of the Lesser Sudas Islands and endemic to Indonesia. This one found on Flores in secondary growth and scrubland.

Thank you Polilla. Glad you like it. Unfortunately the bird was high up and views were very restricted through the foliage but the sun was on it and this little guy practically glowed:)

Thanks Jim. Appreciate the comment. It is a tricky thing to capture but so good when you do! Rob.

Nice photos, Triggs! Sometimes iridescence is hard to capture in a photo, but you did well with this one.