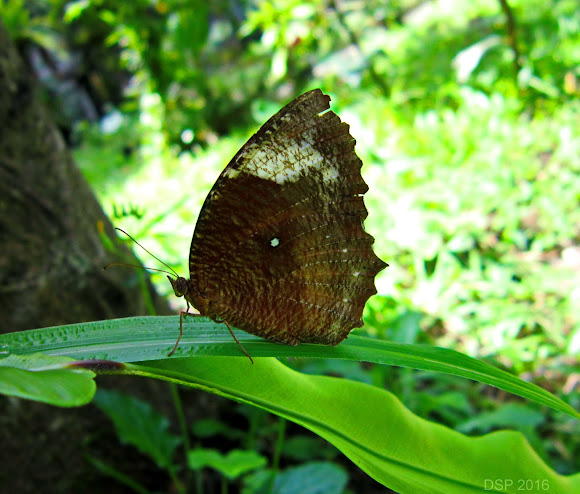 Termens of both wings are prominently scalloped. The hindwing is more strongly toothed at vein 4. Above, the wings are dark brown. On the forewing, there is a series of pale bluish submarginal spots, becoming larger in subapical area and then smaller again along the costal border. In the male, the subapical spots are closer to the apex than in the female. The hindwing is reddish brown with rather pale postdiscal spots. Underneath, the wings are strongly mottled brown. At the apex of the forewing, there is a `thumb-print' (a triangular area in a lighter shade) of varying prominence among specimens. A white spot can be found in the centre of the costa on the hindwing, but this can be absent or inconspicuous in certain specimens.

Typically the adults are shade-loving, and usually sighted flying along the edge of vegetated area and in the vicinity of a clump of palm trees.

The Common Palmfly is the most widespread species of its genus in the Indo-Australian region. Locally, it is also a rather common species with widespread occurrence across multiple habitats. The adults have the habit of puddling and visiting flowers for mineral and energy intakes.