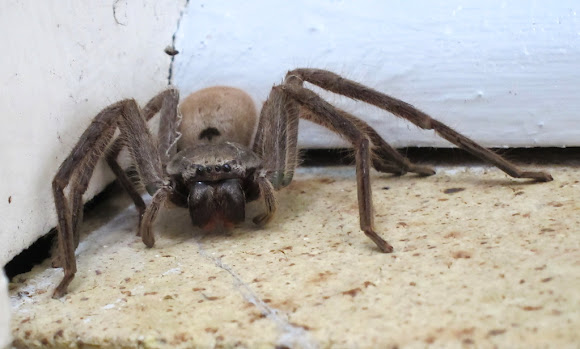 The Brown Huntsman is a large spider patterned in brown and black. It has crab-like legs, and is fast moving. These spiders have eight small eyes, two rows of four across the front of their thorax. They feed on insects and are particularly fond of cockroaches and grasshoppers. Huntsman are quite shy and are harmless to humans, but bites usually result only in mild local pain and swelling should one be bitten. They can grown up to about 15cms across the legs, which is roughly a handspan.

Houses, forested areas, gardens, rainforest. Found under loose bark on trees, in crevices on rock walls and in logs, under rocks and slabs of bark on the ground. This one was spotted tucked in a corner on the verandah.

This huntsman rested in the same spot each day, but at night I found him roaming around on his search for food. Not a very big specimen, but a huntsman all the same with lots of charm and personality. PS: I'm not too sure of the difference between two species of Brown Huntsman - H. cervina and H. jugulans. Both are Australian species. Anyone? Here's a reference I found - http://ednieuw.home.xs4all.nl/australian...