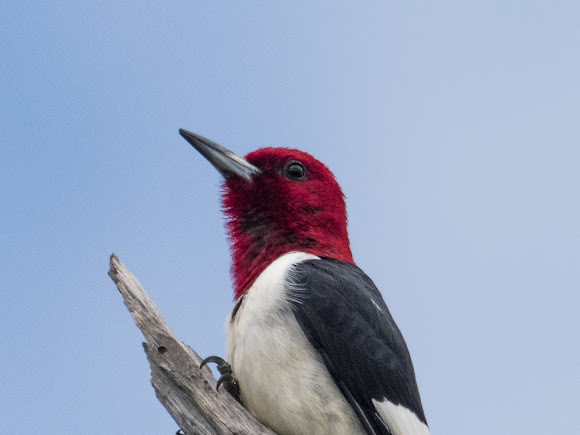 This is a medium-sized woodpecker. Its most striking attribute is a deep dark red/crimson ‘helmet’ covering the head, neck and upper breast. It has a ‘tuxedo’ body with white breast front, black wings with white patches…contrasted with a black tail. This bird is considered Near Threatened, and is on the IUCN Red List. Development and habitat loss are a factor.

These birds were spotted in the northwest Florida panhandle, in Big Lagoon State Park, west of Pensacola. The area sits on the Intracoastal Waterway adjacent to the Gulf. The birds are nesting in a salt marsh interspersed with open woodlands. The area where we spotted the birds has a number of dead Slash Pine trees….which are critical to the bird’s survival. Dead trees provide softer, decaying wood through which the woodpeckers can hollow out for nests and cover.

Some interesting characteristics of this woodpecker…it forages for food, including insects, acorns and nuts, rather than pecking holes in trees to find insects. According to some sources, they store insects alive…for instance wedging grasshoppers in crevices so that they cannot escape. This bird is aggressive in defending their territory. This was noted while snapping photos, see the 3rd photo above depicting two Red-Headeds attacking a Red-Bellied woodpecker near their nest.

Thanks Triggs and Neil!

Beautiful in every sense of the word. Great spotting, Jim.

Thanks, Michael...with that red head, these guys are fairly easy to spot.