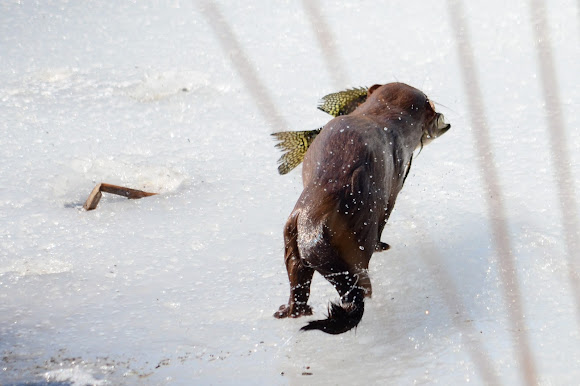 An American Mink bringing home the...fish, enough to feed a family in this case

We first saw this fellow running or lopping across the road. We lost him for a short time in the foliage near the river but later found it in a tree, hiding I believe. Once it deemed it safe to come down, it went down to the open area of river and started fishing. This is a series I took after watching it previously bring up a much smaller fish and run off with it into the reeds and cattails below us, alongside the river. I was amazed at the size of the fish compared to the size of the mink. When it first came out of the water it got up on the ice, set down its catch and gave a mighty shake. After shaking the water from its fur it paused to look around and sniff the air and then proceeded to run towards us/its burrow with the fish held securely in its mouth. It seemed to know we were there and, since we hadn't tried to steal its previous catch, deemed it safe to bring the larger catch home to its den or den's entrance directly below us. We sat and watched this particular Mink for over 45 minutes before it entered deeper water and was lost to our sight.

Great bit of behaviour captured there!

Wonderful series. Looks like the mink has a good size catch.Congratulations on the National Geographic Spotting of the Week!

Beautiful series! Congratulations on National Geographic Spotting of the Week!

What a great capture!

What a wonderful series of pictures!

islandgirl5429-Thank you so much. There are six in this series plus another 5 or 6 I posted of the same mink prior to it catching the Crappie, a video I need to upload to YouTube and about 80 more images of him or her...To say we had fun watching it would be a gross understatement. "-)

What an amazing photo. Great find!

The experience of a life time!

Thanks for sharing such an amazing spotting. Your patience and hard work clearly paid off here. I wish more people would sit and observe wildlife rather than taking a photo and moving on to the next thing.

Thank you so much, cranbrook-sda-youth1!!