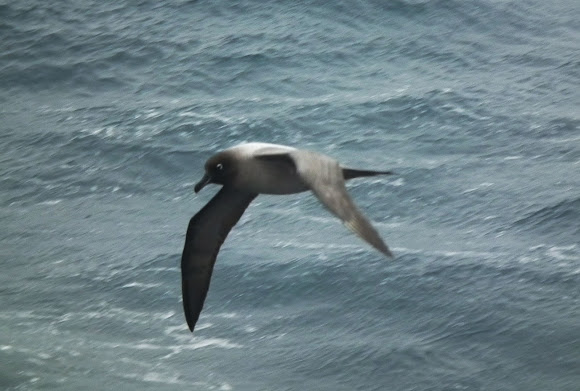 A small albatross that is a sooty brown or black colour all over, except for the grey back (called the mantle in birds) and has a thin crescent of white behind the eyes. Like all albatrosses, they have a nasal salt gland that excretes salt obtained from seawater. Unlike many of the seabirds I encountered in the Southern Ocean, these birds only appeared on their own and sparsely. Listed as Near Threatened by CITES.

Circumpolar distribution, has been recorded quite far south into pack ice and beyond, but also found as far north as 35 degrees S. Lives at sea when not breeding

This was a very rare bird for us, it only ever appeared by our ship a handful of times, and the most I ever saw at once was 2. This was unusual, as even the Wanderers appeared in groups. They were one of my favourite birds though, they are beautiful. Disappointed that the only time I had my camera on me when one appeared, it was stormy and hard to get a good picture! Taking a photo of a grey bird against a grey sky is hard!

Thanks Malcolm!! Yes, it was very stormy that morning! Hard enough to hold the camera still, let alone spot the grey bird in the grey... well, everything, really.

Excellent pictures Laura, I'm surprised you managed to get anything with the sea like that!