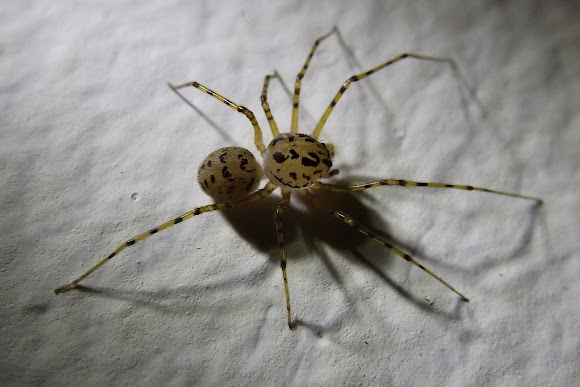 Scytodes thoracica is a spitting spider because it spits a poisonous sticky silken substance over its prey. Its size ranges between 3–6 mm (0.12–0.24 in). The carapace is unusual in sloping upwards towards its rear end, whereas the abdomen slopes downwards. It has six eyes instead of the eight spiders usually have. It is found in the Holarctic, Australia, and on some oceanic islands in the Pacific. This particular spitting spider features the presence of silk glands in its cephalothorax. Besides the silk glands in its abdomen, the spider also has silk glands connected with its poison glands. In this way the spider has the ability to make poisonous silk. Other arachnids may also have silk glands in their cephalothorax, such as the pseudoscorpions.

Scytodes thoracica is nocturnal. It prefers warm temperatures and is not rare inside houses. In Southern Europe, it can be found under stones outside houses. In Northern Europe it can only be found in houses. in contrast to the pseudoscorpions that use the silk from the cephalothorax glands to make nests, the 'spitting spider' uses it to catch prey in a very particular way. It is a very slow hunter as its long and tender legs may suggest. During night, when all insects are at rest, Scytodes starts its hunt. The spider sneaks very carefully towards its prey and, from about 10 mm (0.39 in), stops and carefully measures the distance to its prey with one front leg without disturbing it. Then it squeezes the back of its body together and spits two poisonous silk threads, in 1/600 sec, in a zigzag manner over the victim. The prey is immediately immobilized. When the prey is larger the spider spits several times. It is assumed the spider uses special long hearing hairs located at its legs to locate its prey.

thank-you Alan Thornhill, Their hunting technique is on par, I spotted this particular one a few months back on an egg box,I ran to retrieve my camera it was well out of sight typical! :)

That's a nice looking specimen. I once lived in a flat that had these in - fascinating to watch them.