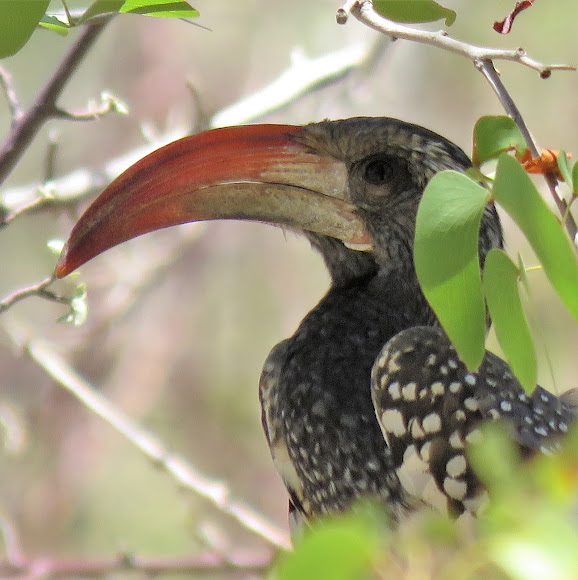 This was my today's lucky encounter, one of birds I was desperately hoping to see - a Namibian endemic (or near-endemic?), Monteiro's hornbill. I guestimated its length at a bit over 50cm, and found it a rather medium-sized for a hornbill. Darker and spotted white above, it does remind of its Southern yellow-billed cousin a bit, but its darker head, darker chest, very white underparts and finer and redder bill dissipate the resemblance.

Seen in Kunene region of Namibia (northwest), somewhere deep in the bush close to a rural road. The environment is arid open acacia tree-and-shrub, very dry (but still magnificent and rich in wildlife) at the moment, following a three-year dry-spell. At mid-day, the bird was hiding in a shade, and was very reluctant to move due to an overwhelming heat.

I'm not sure if Monteiro's Hornbill is an endemic or near endemic - some sources state it's found only in Namibia, while others claim it was encountered also in south-western Angola. Whatever is right, it was a lifer for me, and it seems also a lifer for PN...

Lovely shots Zlatan. I can even feel the heat in pic 5 ! So happy for you and thanks for sharing.