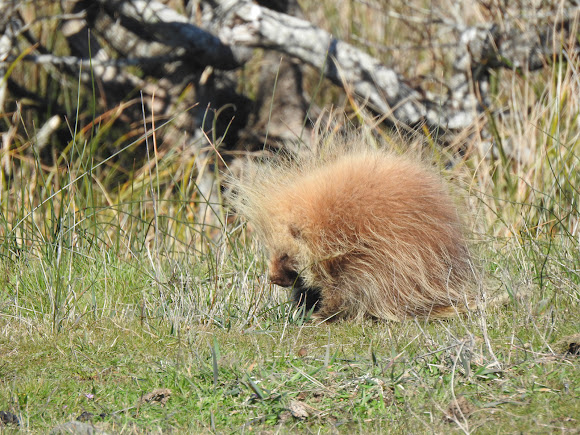 The North American porcupine, also known as the Canadian porcupine, is a large rodent in the New World porcupine family. It is the second largest rodent in North America, behind the North American beaver. They have quills that protect them from most predators. The North American porcupine has specific behaviors to warn or defend against predators. The defense strategy is based on aposematism in several modalities. It has a strong warning odor which it can increase when agitated. When threatened, an adult porcupine can bristle its quills, displaying a white stripe down its back, and use its teeth to make a warning, clacking sound. If the olfactory, visual, and auditory warnings fail, then it can rely on its quills. An adult porcupine when attacked turns its rear to the predator. When approached, the porcupine can swing its tail at an attacker's face. Despite popular myth, the porcupine does not throw its quills. Instead, when a quill comes in contact with the attacker, it can easily penetrate and become embedded in its skin. Each quill contains microscopic barbs which allow it to stick into the flesh of an attacker. This strategy is successful against most attacks. With a face full of quills, an attacking creature often retreats. Normally they are black or dark brown tipped with white. 'Leucism' is often used to describe the phenotype that results from defects in pigment cell differentiation and/or migration from the neural crest to skin, hair, or feathers during development. This results in either the entire surface (if all pigment cells fail to develop) or patches of body surface (if only a subset are defective) having a lack of cells that can make pigment. Since all pigment cell-types differentiate from the same multipotent precursor cell-type, leucism can cause the reduction in all types of pigment. This is in contrast to albinism, for which leucism is often mistaken. Albinism results in the reduction of melanin production only, though the melanocyte (or melanophore) is still present. Thus in species that have other pigment cell-types, for example xanthophores, albinos are not entirely white, but instead display a pale yellow color.

on a grassy area at the side of the road

Being the color of dry grass, this individual blends in very well. I suspect this is why he has been reported out and about at this spot feeding during most afternoons

Thank you, Neil! We tried to relocate him last month, as locals told us he was there "every" afternoon. Apparently(as most wildlife watchers know) not every.

Wonderful spotting, Karen. And thank you for your notes too! Amazing to learn about these animals. Congratulations on your much-deserved SOTW.

Thank you. It was pretty awesome to see, especially only about 2 hours from home!

Congratulations, both on the SOTW and the rare find!

Thank you, Michael! It's an honor.

Congratulations, your spotting has been voted Project Noah's Spotting of the Week! The PN community looks forward to seeing your next nature discovery.

Thank you, Maria! It was a fun find

Thank you for the nomination. It is an honor

Sergio - had to dequill a dog once. It's not fun

I once saw a dog with its face full of porcupine quils. It is absolutely heart breaking. Very nice spotting, Karen, and great notes. Thanks for sharing.

Great series. Does look as if he has used too much conditioner though :-)

How wonderful. Melanistic/Leucistic...unusual and rare. Thank you for sharing.

Cool critter! Thanks for sharing, Karen.

Wow! I've always wanted to spot a porcupine. How cool to find one that is leucistic. Great notes, Karen!